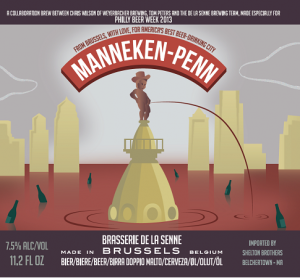 PHILADELPHIA, PA — During the sixth-annual Philly Beer Week (PBW) 2013, May 31 through June 9, beer drinkers will be able to enjoy a number of collaborative beers, brewed in cooperation by top local and international brewers, to debut during PBW. One such special beer, brewed in Brussels, Belgium during PBW’s annual “Win a Trip to Belgium” event for local beer lovers, is Manneken-Penn, a Belgo-American Dubbel. This past winter, raffle winner Matt Hohorst, along with head brewer Chris Wilson of Weyerbacher and Tom Peters of Monks Café traveled abroad to brew with Yvan De Baets at Brasserie de la Senne. Manneken-Penn will be available for the first time on Friday, May 31, at Opening Tap (click for tickets).

“Collaboration beers are a huge part of what makes PBW special: brewers coming together and pushing each other to do ever more outrageous and delicious things,” says PBW Executive Director Don Russell. “As always, we’re very excited to see what amazing new beers they’ve created — and to raise a pint to ‘America’s Best Beer-Drinking City’.”

Manneken-Penn is a 7.5% Belgo-American Dubbel whose name and label art were inspired by Philadelphia’s famed William Penn statue above City Hall, and Brussels’ landmark Manneken Pis sculpture of a playful naked boy — ahem — relieving himself. Manneken-Penn was made with oats, molasses and a combination of American and European hops. It is imported for PBW by Shelton Brothers and will be available both on draft and in 11.2 oz bottles.

Throughout the 10 days of PBW, beer drinkers will be able to enjoy other collaborative brews including: