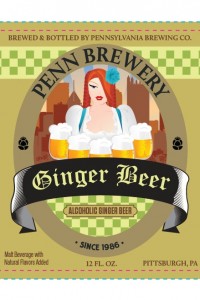 Penn Ginger Beer is tailor-made for summertime. It gets its flavor from freshly grated ginger root that’s added to the boil kettle, giving the beer a subtle aroma and just a gentle kick of ginger flavor that makes it lightly refreshing yet pleasantly spicy. With 4.5% ABV and 10 IBUs, Penn Ginger is brewed with two-row Euro Pilsner malt and a small amount of Hallertau Perle hops. The beer begins shipping in 24-pack cases, six-packs, and draft beginning the first week in May.

Penn Brick Biergarten IPA will make for happy “hop heads.” Brick Biergarten is an American IPA made with several different malts including two-row, caramel, and Maris Otter, along with Falconer’s Flight 7 C’s blend of seven different hops. It’s a robust beer, with 7% ABV and 70 IBUs. The “Brick Biergarten” name and label pay homage to the original old cobblestone biergarten at Penn Brewery’s 150 year-old German brewery building. Brick Biergarten will be available in 24-pack cases, six-packs, and draft beginning the first week in May.

Penn will highlight these two new beers at its eighteenth annual Pennsylvania Microbrewers’ Fest on June 7. Penn will host 25+ breweries, all serving samples of their brews. Patrons may choose one of two sessions, 1-4 pm or 6-9 pm, and enjoy live entertainment from the Flow Band (first session) and Joel Lindsey & Blvd. of the Allies Trio (second session) as well as a buffet meal. Tickets are $45, making Microbrewers’ Fest an especially good value among local beer fests. Price includes all beer samples, one trip through the buffet line, and a souvenir beer glass. Tickets can be purchased online at Showclix.com http://www.showclix.com/event/3820495. Guests must be 21 years or older to attend. A portion of the proceeds will be donated to the Community Alliance of Spring Garden and East Deutschtown.

Penn Brewery, opened in 1986, is Pittsburgh’s oldest and largest brewery. It specializes in award-winning German-style craft beers sold in Pennsylvania, New York, Ohio, Maryland, Virginia, and Florida. The Brewery is located in Deutschtown on Pittsburgh’s North Side, in the mid nineteenth-century landmark E&O Brewery Building.