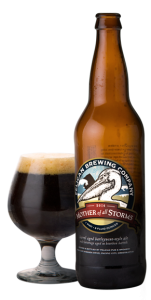 Pacific City, OR — Along the Oregon Coast ominous clouds can blow in at a moment’s notice. These storm systems bring heavy precipitation and high winds across the entire Pacific Northwest seaboard. Often the strongest squalls will be over in a matter of minutes while others can last for days. Knowing exactly when a storm will hit land is very difficult to predict. There is, however, one storm that makes ground every year in the town of Pacific City, Oregon.

Mother of All Storms from Pelican Brewing Company is a Barrel-Aged Barleywine. Based on Stormwatcher’s Winterfest, this English-Style barleywine spends several months aging in Kentucky bourbon barrels before it’s bottled and kegged. Mother of All Storms delivers deep flavors of toasted malt, bourbon and oak. The finish rewards with whispers of vanilla, toffee and caramel. It is best enjoyed during gusts exceeding 60mph and the 14% ABV will help to retain warmth while waiting out the storm.

Because quantities are limited Pelican Brewing Company opens its doors at 8am on November 15th, making it first available to those waiting outside the brewery who have weathered the elements. The special release of this anticipated brew highlights the “Mother’s Day” weekend in Pacific City. On Saturday, November 15th the Mother’s Day festivities begin at 8:00am at the Pelican Pub & Brewery with live music, special tasting events, Mother-infused food items, and Mother of All Storm giveaways. This year the Barrel Room in the brewery will be open with coffee at6am so waiting in the elements is now optional.

GET MOTHER DELIVERED FOR THE HOLIDAYS!

And finally, just like in years past, IF any cases are still available – there will be a first come, first serve e-mail opportunity to purchase a case of Mother of All Storms – These will ship in time to enjoy over the Thanksgiving holiday. Send an email to Mother@PelicanBrewery.com to be added to the email waiting list. We will contact individuals after the 16th of November should any still be available.