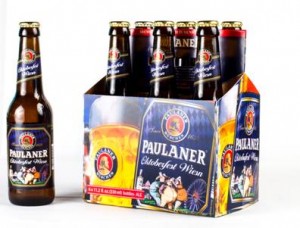 LITTLETON, CO. — Attention Beer Drinkers: Oktoberfest is coming early this year just for you, thanks to Paulaner Brewery. The Limited Edition Oktoberfest Wiesn is being brewed a month early and will be available on shelves exclusively in the U.S. by the end of June so the revelry of Oktoberfest can officially begin.

Paulaner’s Oktoberfest Wiesn is only brewed and distributed once a year in honor of Oktoberfest. This tasty golden lager has made its way to the U.S., but it was initially brewed and sold exclusively in Munich at the Oktoberfest grounds. Wiesn is the German word for Meadow, named for the location of the Munich Oktoberfest celebration. Wiesn remains the only beer being served in the Paulaner Oktoberfest tent, and now you can enjoy it in your own home!

With the early debut of the Paulaner Wiesn comes a convenient new packaging. This year, for the first time the limited edition brew will be bottled and available in six-packs of single serve bottles. The six-pack you have been waiting for will join the rest of the Paulaner line-up in the refrigerated section, and will be ready for your enjoyment upon purchase.

Paulaner also released a new 15-bottle Oktoberfest Party Pack and, as of last week, it is already sold out, even before production of the pack. The Paulaner Wiesn is just as popular so jump on it before it runs out.

Paulaner has launched these great offerings that will make you feel immersed in German tradition, whether or not your plans lead you to Munich this fall.