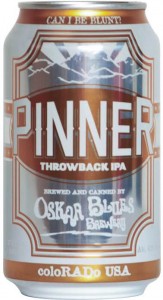 Longmont, CO, & Brevard, NC–Oskar Blues is adding PINNER Throwback IPA to the brewery’s year-round lineup of beers in 12-ounce CANs and on draft. PINNER will be released first in Oskar Blues’ home states of ColoRADo and North Carolina in mid-December. Coming in at 4.9 percent ABV and 35 IBUs, this primo dry-hopped brew will be easy to throw back. To put it bluntly, PINNER will be the lowest year-round ABV beer to blaze out of Oskar Blues’ brewhouses.

“Many things contribute to flavor in beer, and with Pinner it’s a focus on hops and malt–with a considerable nod to the hops,” says Oskar Blues ColoRADo head brewer Tim Matthews. “With the lower ABV, layers of flavor build on one another–with one sip citrus, the next sip pineapple, next sip papaya, next sip passion fruit, next sip toasted bread–and then on to the next pint.”

Dry-hopping with several different heady hops, including a killer experimental variety, gives PINNER this tropical, stoned fruit aroma with hints of pine and smooth malt in the flavor.

PINNER will be brewed in both home states of ColoRADo and North Carolina and initially distributed just in Oskar Blues’ backyards. PINNER will join the mixed-pack, CANundrum, in February for national distribution, making that a hotbox of Oskar Blues beers. CANundrum will now include the iconic Dale’s Pale Ale, the crisp Mama’s Little Yella Pils, the peaty smooth Old Chub Scotch Ale, and the 4.9 percent ABV PINNER IPA.