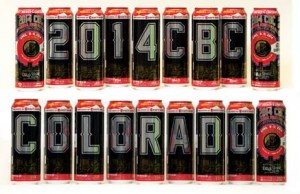 Colorado – The 2014 CBC Commemorative Beer is an innovative collaborative project involving 145 Colorado Brewers Guild member brewers. For months, Colorado brewers have been developing dozens of ideas for this special brew. The official 2014 CBC beer will be called Centennial Pale Ale in connection with Colorado being known as the Centennial State.

The Centennial Pale Ale is the first American craft beer to use the Ball Corporation’s new DynamarkÔäó Variable Printing Technology. The variable print technology will create a collection of cans that will spell “CBC Colorado 2014” when aligned with the full collection of cans available to CBC attendees. In addition to the DynamarkÔäó Variable Printing Technology the Centennial Pale Ale demonstrates the innovative nature of Colorado’s craft beer culture by being the first ever CBC collaboration beer to be packaged in a can, a 19.2 oz. single serve can that was introduced to the US market in 2013.

Beer Ingredients: All ingredients and supplies were donated by the following companies.

All 145 Colorado Brewers Guild member brewers were invited to the brew day on February 24th, 2014 at Oskar Blues Brewery.

Founded as a brewpub by Dale Katechis in 1997, Oskar Blues Brewery launched the craft beer-in-a-can apocalypse in 2002 using a tabletop machine that sealed one can at a time. In 2008, the makers of the top-selling pale ale in ColoRADo, Dale’s Pale Ale, moved into a 35,000-square-foot facility in Longmont, ColoRADo. The brewery has since experienced explosive growth—packaging 59,000 barrels of beer in 2011 and 86,750 barrels in 2012. In December of 2012, Oskar Blues opened the doors to an additional brewery in Brevard, North Carolina. Together, the breweries packaged 119,000 barrels of beer in 2013, distributing its trailblazing craft brews to 33 U.S. states and Washington, D.C.