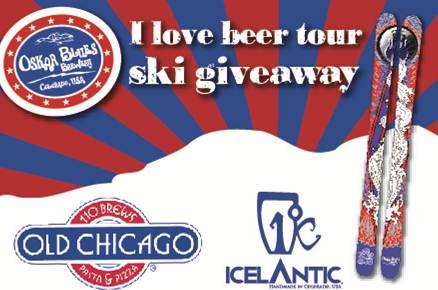 LONGMONT, Colo. — A true Colorado Collaboration: Drink Oskar Blues Brews in the “I Love Beer Tour” at all Colorado Old Chicago locations and earn a chance to win a pair of Colorado born, custom Icelantic Skis.

This Colorado Collaboration is launching January 16th at the “I Love Beer” Mini Tour kick-off party at all Colorado Old Chicago locations. The tour will feature three beers from Oskar Blues Brewery including two specialty beers brewed specifically for the Colorado tour. The original slope side beer, Dale’s Pale Ale, leads the Oskar Blues offerings and is followed by CHAKA Belgian Style Ale, a beer that was debuted exclusively at the Craft Beer Conference in spring of 2012 and introduced a new Alumi-tek can package to the craft beer world. IceyPA is a wheat IPA brewed in celebration of Colorado winter and Oskar Blues’ partnership with Denver’s Icelantic Skis. For a complete list of Old Chicago locations that will be hosting the specialty brews and ski giveaways, check out www.oldchicago.com

This is the third collaboration between Oskar Blues & Old Chicago. In 2011, Old Chicago was the place for the exclusive launch of Deviant Dale’s IPA during the same “I Love Beer Tour”. That beer went on to win a Silver Medal in the 2011 Great American Beer Festival’s American India Pale Category, the most competitive category in that competition’s history with 176 entries. Also in 2012, Oskar Blues’ kicked off the tour with “HGH (Home Grown Hops) Part DUH” for all Colorado, Wyoming, Arizona, Oregon and Wisconsin Old Chicago locations. HGH Part DUH is a 7.5% A.B.V and 70 I.B.U. Strong Ale brewed with hops locally grown at Oskar Blues Hops & Heifers farm.

In addition, Old Chicago and Oskar Blues share much in the way of history. Dale Katechis, the heart & soul owner of Oskar Blues, gained experience within the Old Chicago group of restaurants & was the General Manager at the Longmont Old Chicago location which is now only a few blocks away from Oskar Blues Home Made Liquids & Solids. Dave Chichura, Oskar Blues head brewer, has four years of history with Rock Bottom Brewery, a sister concept to Old Chicago.

Set in the heart of Colorado craft beer country, Oskar Blues Brewery in Lyons began canning its beers in November of 2002 with a hand-canning line in the 60-year-old barn next door to their funky little brewpub. Celebrating the brewery’s 10th CANiversary it’s now a full- throttle canning operation that is quickly expanding its cult-like following across the nation.