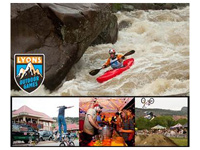 LYONS, CO – The Oskar Blues born Burning Can Beer Fest is back for round two and they’re teaming up with Lyons Outdoor Games to bring you everything craft beer in a CAN offers: fresh, earth-friendly beer in a portable container that takes you to your next soul-saving outdoor adventure.

As Dale’s Pale Ale approaches its tenth year, Oskar Blues invites all beer lovers to celebrate the REVOLUTION of big-flavored craft beers served up in cans in their hometown of Lyons, CO. Set amidst the backdrop of beautiful Rocky Mountain National Park in Bohn Park on June 9th, 2012, Burning Can adds a national craft beer twist to the world class events of the Lyons Outdoor Games. www.lyonsoutdoorgames.com

Burning Can offers samples of canned craft beer from 25+ innovative breweries across the country jammed in the middle of live music, food trucks (including Oskar Blues’ Bonewagon), Burning Can 1 Mile Run and the dirt-jump bike competition as world class kayakers are running the river. Now in its 11th year, the multi-sport competition of the Lyons Outdoor Games has grown into a world-class celebration of mountain sports drawing heavy hitters from the outdoor industry over three days from June 8th to 10th.

“The Lyons Outdoor Games attract world-class athletes but also offer many opportunities for beginner and intermediate athletes to learn and develop skills under the downhome, grassroots feel of Lyons, CO.” says Dave Cosgrove, Lyon’s Park and Recreation Director. The South Saint Vrain creek is the definition of steep, manky, roadside class V+ for boaters in Colorado and has become the stage for the renowned Adam Barron Memorial Creek race. This race is the highlight of the Lyons Outdoor Games kayaking events providing world class athletes an opportunity to “sack up”. Tao Berman is a reigning two-time champion, while World champion Scott Shipley is determined to dethrone the king and ward off the young guns thinking they’re up to the task.

In addition to kayaking and biking, the Games offer events for fly fishing, climbers, runners and even dogs (yep, there are two dog events — the K9 Cannonball & K9 Speed Retriever!). On Saturday, June 9th, is the Burning Can 1 mile run, a jump-start-your-day running race around town that puts you right where you want to end up — at the beer fest!

What would a CANNED beer festival at an outdoor-sports celebration be without recycling? Green Girls Recycling (www.greengirlrecycling.com ), based out of Boulder, has signed up to be our official recycling team. All money raised from Lyons Outdoor Games recycled cans will be donated to our beneficiaries. Canned craft beer has many benefits including defending beer from the damages of sunlight, an air-tight seal that allows less oxygen into the beer creating a fresher tasting beverage. Aluminum cans are infinitely recyclable and are lighter to ship, reducing the environmental impact. Last, but not least, you can take CANNED beers where your next soul-saving adventure takes youÔÇª.including places where glass isn’t allowed and where you need to “pack it in, pack it out.”

Oskar Blues will feature live music all weekend at their Grill & Brew location including a soon to be named big act for Sunday. All proceeds from the event go to the Lyons Department of Parks and Recreation and the Colorado Brewers Guild, two groups that embody the soul of Oskar Blues. The Colorado Brewers Guild is a key player in the continued growth and celebration of Colorado’s craft beer industry. Lyons Outdoor Games is a tribute to the sports of the great outdoors.

For a full list of events at the 2012 Lyons Outdoor Games visit: www.lyonsoutdoorgames.com . Tickets are $25 in advance, $30 day of. Receive $5 off of the day-of ticket price if you ride your bike to the festival as Bicycle Longmont will be providing bike valet. Tickets are available at http://2012burningcanbeerfestival.eventbrite.com/

There is ample camping at Bohn Park and Meadow Park in Lyons and More information about lodging is available at http://www.lyons-colorado.com/lodging/lodging.htm#camping.

Originally known as the Lyons Whitewater Festival, the Lyons Outdoor Games was created 11?years ago as a fund-raising vehicle for the Lyons Department of Parks, Recreation & Cultural Events. In addition to a full complement of world class kayaking, biking, fly fishing, chainsaw carving and even dog events, the 2012 Games will feature live music along with numerous clinics and exhibitions put on by some of the world’s most elite professional athletes. www.lyonsoutdoorgames.com

CBG is a trade association dedicated to the Colorado craft brewing industry and facilitates educational beer activities in Colorado. The CBG sponsors a variety of beer events throughout the state each year designed to increase awareness and appreciation of Colorado brewed beer. For information about the Colorado Brewers Guild and its member breweries: www.coloradobeer.org.

Human Movement (www.humanmovement.me/ ), a local event management company, is partnering up with the Lyons Department of Parks & Recreation and Oskar Blues to present the 2012 Lyons Outdoor Games and the first ever inclusion of the Burning Can Beer Fest.