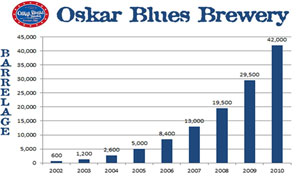 LONGMONT, CO – Oskar Blues has always been seen as a pioneer of craft beer in a can but the Brewers Association Top 50 Breweries list for 2010 ranks them as one of the fastest-growing craft brewers in the nation.

The explosive year moved them up from number 44 on the 09′ list to the number 36 Craft Brewing Company and broke them into the top 50 as the number 49 Top Brewing Company in the country based on stats from the industry’s largest association.

Just eight years ago, Oskar Blues sold 600 barrels and each year has seen double and even triple digit growth. In 2010, Oskar Blues reached 42,000 barrels compared to 29,500 the year before. The 43 percent increase is strong within the 11 percent increase of the craft beer category. To keep pace with demand, the company significantly expanded its infrastructure in 2010 by adding six 200 BBL fermenters, and one 200 BBL bright tank in a timeframe of 60 days.

In February of 2011, the brewery installed a 200 BBL fermenter and a 200 BBL bright tank as well as a new keg line and Hi-Cone six-packing machine. Oskar Blues was scheduled to have two additional tanks delivered in March but plans went awry when they were destroyed in transit. April saw the addition of two 200BBL fermenters and a wort receiver, which allows 20 percent more brews per day. The two 200BL replacements for damaged tanks are scheduled to arrive next month.