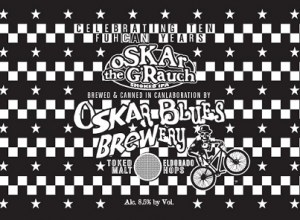 LONGMONT, CO — Craft beer in-a-can pioneers Oskar Blues Brewery and SKA Brewing have come together to create a CANlaboration beer to celebrate the 10 Year CANiversary of Dale’s Pale Ale. The Smoked IPA, “oSKAr the G’Rauch”, is the first official brewing collaboration between the two breweries that share much of the same Colorado lifestyle. Hell, you can’t spell Oskar without Ska.

The two brewers are ColoRADo kindred spirits of sorts, both hailing from inspiring mountain towns that shape their quality of life while doing things their own deranged way. Oskar Blues became the first American craft brewer to brew and can their beer with Dale’s Pale Ale in November of 2002 and SKA Brewing moved to can their ESB Special Ale a few months later. The two breweries have been leaders of the canned beer movement ever since. They have ridden the five-day “Tour of Bouldurango” charity bike ride from Boulder, CO to Durango, Co that was organized by Adam Avery. A few years ago Ska purchased Oskar Blues’ canning line and the Oskar Blues crew delivered it through a snow storm to help install the machine and turned the adventure into a week-long ski vacation.

“We talked about doing a special beer for our CANiversary and we instantly knew we wanted to brew it with the Ska crew. We’re always looking for a reason to get together with those guys.” said Oskar Blues beer traffic control freak Jeremy Rudolf.

“We couldn’t be more humbled, brewing this beer with the fantastic brewers and our great friends at Oskar Blues. Ten years ago OB took a great leap of faith with their decision to put Dale’s Pale Ale in cans, and we followed suit just months later, and have successfully ridden their coattails for the entire last decade.” said Ska’s Dave Thibodeau.

About the beerÔÇªWhat did oSKAr the G’Rauch say to the face? Slap! Aromas of freshly-peeled orange and apricots with a touch ofÔÇªÔÇª..smoke? Juicy citrus and fruit flavors dominate but don’t overpower the slightly sweet malt structure. Finish is all citrus rind ping-ponging with some smoky phenols. 8.5% ABV. MANY IBU.

19.2 oz. cans of the Smoked IPA will debut at the 10th CANiversary party at Oskar Blues Grill & Brew in Lyons, CO Saturday, November 17th. The celebration will feature FREE LIVE MUSIC (6pm to 9pm) by “Erik The Viking” and “Interstate Stash Express” before a SOLD OUT show by Los Angeles’s “The White Buffalo” at 9:30pm to 1am. Get all the details about the Dale’s Pale Ale 10 Year CANiversary on November 12th, 2012. https://www.facebook.com/OskarBluesCANS/events#!/events/349401091819904/

Limited quantities of “oSKAr the G’Rauch” will be available in 19.2 oz. Single-Serve Cans and 16oz. 4-packs at the Oskar Blues Tasty Weasel Taproom and Oskar Blues locations while supplies last.

Founded by Dale Katechis in 1997 as a brewpub and grill, Oskar Blues Brewery launched their craft-brewed hand canning operations in 2002 in Lyons, Colo. They were the first American craft brewery to can their beer. Today more than 180 craft breweries are canning their beers. The original crew used a hand-canning line on a tabletop machine that sealed one can at a time. Oskar Blues Brewery in Longmont packaged 41,000 barrels in 2010, grew to 59,000 in 2011 and is on pace for 90,000 in 2012. While celebrating 10 years of Dale’s Pale Ale the brewery has announced it will begin brewing beer in their new Brevard, NC brewery in December 2012. Visit www.oskarblues.com, http://www.facebook.com/OskarBluesCans, @oskarblues for more information.

Based in Durango, Colorado, Ska Brewing was founded in 1995 and now produces over a dozen award-winning beers including the Pinstripe Red Ale, True Blonde Ale and Steel Toe Stout. Four Ska beers are now widely available in cans: ESB Special Ale, True Blonde, Modus Hoperandi IPA and the winter seasonal Euphoria Pale Ale. For information, music and a good time, visit www.skabrewing.com. Find out what “calamity howlers” are, chat us up, and get the latest news at facebook.com/skabrew and twitter.com/skabrewing.