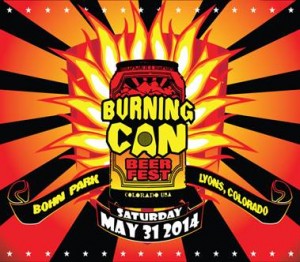 Lyons, CO — Oskar Blues Brewery and the Town of Lyons announced this week that despite the September flooding that damaged the majority of the town’s parks and rec areas—the popular Burning CAN Beer Festival and Lyons Outdoor Games (http://lyonsoutdoors.com/) will once again bring together beer lovers and outdoor adventure under views of Rocky Mountain National Park in the unaffected areas of Bohn Park.

In its third year, the Oskar Blues Burning CAN Beer Festival is back and bigger than ever with over 50 can-centric breweries signed on to pour 150+ beers from all over the U.S. Last year 1,500 people descended on the town for the festival to celebrate craft beer, outdoor adventure, live music, and the small town vibe of Oskar Blues Brewery’s hometown of Lyons, CO. The beer festival will kick off on May 31st with a VIP session ($45) from 3 p.m. to 4 p.m. that will give craft beer fans access to their favorite breweries and brews one hour before the opening of the general session ($30 in advance & $35 day-of) which runs from 4 p.m. to 7 p.m. Proceeds from Burning CAN will be raised through the Oskar Blues CAN’d Aid Foundation and will benefit the Town of Lyons Parks & Rec department and the Colorado Brewers Guild. In 2013, CNN listed the Burning CAN beer festival as one of “7 don’t-miss U.S. beer fests”.

“The CAN’d Aid Foundation has raised over $600,000 for flood relief since the September floods & Burning Can Beer Fest has provided more than $40,000 for the Town of Lyons Parks & Recreation department and the Colorado Brewers Guild over the past 3 years, but this year it’s even more important to get together and celebrate the spirit of Lyons and continue raise money to help rebuild our town.” said Lyons resident & Oskar Blues marketing director, Chad Melis.

In addition to raising funds through ticket sales for the festival, Oskar Blues Brewery, the CAN’d Aid Foundation, and Ball Corporation have teamed up to add another fundraising and sustainable element to the mix. ColoRADo-based events company, Zero Hero, has signed on to create a zero waste event and oversee recycling efforts of all cans from the beer festival and Lyons Outdoor Games. More than 265 pounds of aluminum were recycled at last year’s event, raising additional funds for the Town of Lyons Parks & Rec department and the Colorado Brewers Guild.

Along with the Burning CAN Beer Festival, the Lyons Outdoor Games will once again include pro kayak events (limited), the high-flying “Outlaws of Dirt” Jump series http://outlawsofdirt.com along with a junior pump-track event, a rugby tournament, the Ultimate Athlete Competition, the 2014 Lyons Outdoor Games Slackline Jam presented by Gibbon Slacklines, Corn Hole Tournament, live music, food booths and a family-friendly area.

The New Orleans based singer-songwriter will take the outdoor stage with his power trio for a FREE concert at 8 p.m. following an opening set by local favorites, Interstate Stash Express at 7pm.

For a list of the 50+ breweries, more information, and a link to purchase tickets to the Burning CAN Beer Festival, visit www.burningcan.com

The Oskar Blues CAN’d Aid Foundation (https://foundation.oskarblues.com) was created following the massive flooding in Oskar Blues home towns of Lyons & Longmont, CO. Although the “CAN’d Aid Foundation” has begun developing national partnerships in a variety of areas the foundation’s immediate focus was on maximizing fundraising efforts for the expedited distribution of monies to areas that experienced massive devastation during severe flooding that struck the Front Range of Colorado. The foundation rallied with the support of the brewing industry, The Infamous String Dusters and OneRepublic to raise $515,000 reaching their 2013 goal of $500,000. The foundation quickly funded 55 Small Businesses, 236 Individuals & Families and 5 Organizations for flood relief be the end of 2013.

Originally known as the Lyons Whitewater Festival, the Lyons Outdoor Games was created 13ÔÇÉyears ago as a fund-raising vehicle for the Lyons Department of Parks, Recreation & Cultural Events. In addition to a full complement of world class kayaking, biking, fly fishing, chainsaw carving and even dog events, the 2014 Games will feature live music along with numerous clinics and exhibitions put on by some of the world’s most elite professional athletes. www.lyonsoutdoorgames.com