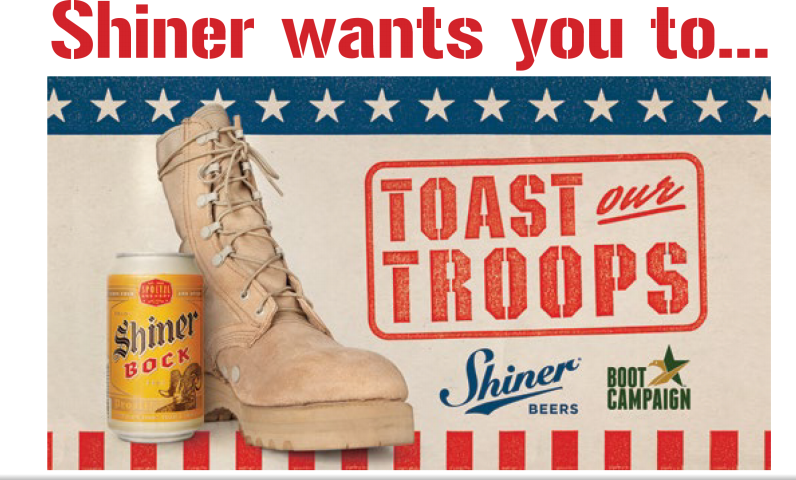 Philadelphia, PA: Origlio Beverage is partnering with Shiner Beer and WXTU 92.5FM to host multiple Toast Our Troops events on July 25th to raise money to support past and present military personnel and their families through The Boot Campaign.

Shiner Beer has a long-standing connection to the U.S. military. For troops here and abroad, Shiner has always been a taste of home. The brewery initiated the Toast Our Troops program in 2011. Since its beginning, this program has raised almost $300,000 for The Boot Campaign, a national, nonprofit organization, dedicated to cultivating awareness, promoting patriotism and providing assistance to military personnel (past and present) as well as wounded soldiers and their families. Again this year, Shiner is committed to donating .50 cents for every specially marked case of Shiner Bock cans purchased through July to The Boot Campaign.

The Boot Campaign is a grassroots initiative started by five women from Texas known as the Boot Girls. The military-style boots sold at bootcampaign.com tell the story of thankful Americans who wear their gratitude for the guardians of the nation’s freedom. Proceeds from boot sales, combined with donations and corporate sponsorships (like Shiner’s), help fund five assistance initiatives: jobs, housing, wellness, urgent assistance and family support to our heroic veterans.

Nine different locations will be hosting simultaneous Toast Our Troops events on July 25th; the four locations of Miller’s Ale House Restaurants (Langhorne, Philadelphia, Springfield, and Willow Grove) and the five locations of Landmark Americana (Philadelphia, University City, Wayne, West Chester and Glassboro, NJ). Each location will provide unique opportunity to support military families and enjoy the beers of one of America’s most celebrated breweries. Also, attendees will have the chance to win a pair of coveted combat boots from bootcampaign.com courtesy of Shiner Beer. Each location will raise money for the Boot Campaign through donations and Toast Our Troops die cuts hung around the bar. Shiner Beer has released Toast Our Troops camouflage pint glasses and dog tag bottle openers that will only be available locally at the upcoming Toast Our Troop events.

Founded by Antonio Origlio in 1933, Origlio Beverage’s mission is, and always has been, to bring outstanding domestic, imported, craft and micro-brewed beers to the Delaware Valley. With an ever-growing portfolio, we will continue to bring the best of the beer world to the Philadelphia five-county area.