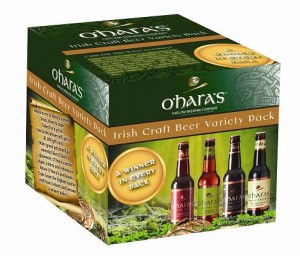 CORK AND CARLOW, Ireland – Ever wonder how the Irish celebrate St. Patrick’s Day? Wearing green, having large feasts and drinking pints of the Emerald Isle’s greatest consumable goods: Irish beer. But not all Irish beers available in the U.S. are created equal or even brewed in Ireland proper for that matter. This St. Patrick’s Day, keep it real and celebrate with O’Hara’s Authentic Irish Craft Brews. Each beer style is crafted using classic brewing methods to create the traditional Irish beer styles that have long been forgotten by the larger breweries.

To satisfy consumers’ thirst for variety, O’Hara’s is offering a Limited Edition Variety Pack, a collection of four award-winning, authentic, best-loved Irish brews just in time for St. Patrick’s Day. In addition to featuring O’Hara’s Irish Stout, O’Hara’s Irish Red, O’Hara’s Irish Pale Ale and O’Hara’s Leann Follain, each variety pack will include an $8 rebate. Consumers can also enter a sweepstakes on the O’Hara’s Facebook page to win prizes, including a grand prize of $1,000.

Another bonus during this St. Patrick’s Day season is a U.S. visit from Seamus O’Hara, the founder and owner of Carlow Brewing Company, who will embark on a Barnstorming Tour to share his passion for Irish and craft brews alike. He will make stops in Philadelphia, Minneapolis/St. Paul and Denver with more cities to be announced soon.

“For most American St. Patrick’s Day revelers, there are two options —choke down a watery domestic beer dyed green or drink an overrated Irish stout that’s usually brewed anywhere but the Emerald Isle,” said Sean O’Grady, US brand manager for O’Hara’s. “If you think you’ll never stray from your favorite traditional Irish Stout, I urge you to think again. Time and time again, one sip of O’Hara’s Irish Stout has die-hard stout-lovers swearing off that other Irish beer.” And they aren’t alone.

O’Hara’s Irish Stout was named as one of Draft Magazine’s Best Beers of 2013 with a rating of 97 while the other brews in their portfolio have won awards in Ireland, Sweden, Israel and America.

And with the wealth of good Irishmen and true Irish beer lovers living in America, there is a calling for more O’Hara’s in America. Kegs and cases of the O’Hara’s craft brews are imported from Ireland by Colorado-based Paulaner HP USA. O’Hara’s is widely available throughout the United States, from local Irish pubs to larger liquor stores. Our Beer Finder on Facebook.com/OHarasIrishCraftBeersUSAFacebook will help locate nearby accounts. www.carlowbrewing.com