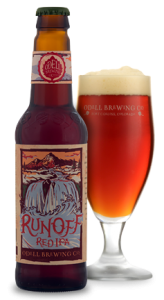 Runoff is named for the crisp, clean, Rocky Mountain snowmelt that is key to not only the brewing process, but also to the local ecology. Brewed with a robust malt bill, Runoff boasts a rich malt backbone and a bright garnet color. The brew is dry-hopped with a generous variety of American hops, giving the beer a fruity citrus aroma and a kick of grapefruit and pine hop character.

Runoff is also available in the Winter-Spring Montage Variety Pack. The seasonal 12 pack also features the brewery’s flagships 90 Shilling and IPA, as well as the latest Roots Release brew, Wolf Picker Experimental Pale Ale. First introduced in early 2014, Wolf Picker is named in honor of the hop growing community and the harvesting rig many use. Each year, the brew is crafted with the same malt base but with new and unique varieties of hops. Some of the varieties are so new, they’re not even named yet.

Wolf Picker 2015 features the experimental HBC #472 hop, and the recently reintroduced Comet hop. The two offer a complex and layered hop character that combines hints of grapefruit, lemon, and tangerine in the bright aroma with a refreshing tropical fruit and citrus hop flavor.

Founded in 1989, Odell Brewing was started by Doug Odell, his wife Wynne, and his sister Corkie. Today, the culture of family and collaboration still thrives fostering a brewery full of beer-centric people. It is this passion for beer that inspires Odell Brewing to create quality, hand-crafted, innovative brews. As a regional craft brewery, Odell Brewing is committed to serving the communities in which it distributes by minimizing its environmental impact, sourcing local raw materials, and through its charitable giving program known as Odell Outreach. Odell Brewing was named a “Best Company to Work For” in 2013 by ColoradoBiz Magazine and is an award winning brewery, nationally and internationally: 2014 World Beer Cup® – gold for Runoff, 2013 Great American Beer Festival® – gold medal for 5 Barrel Pale Ale, 2012 Brewers Association Recognition Award, 2011 Great American Beer Festival® – gold medal for Friek, 2008 World Beer Cup® – gold for IPA. 2007 Great American Beer Festival® – gold medal for IPA.