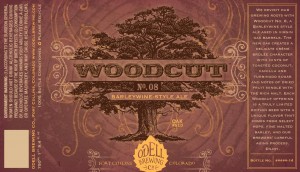 Fort Collins, CO — On October 1, 2014, Odell Brewing will release Woodcut No. 8, a Barleywine-style ale aged in new American oak barrels. The eighth release in the revered series pays tribute to the brewery’s English style brewing roots. Each Woodcut offering is a truly limited edition beer with a unique flavor that comes from select hops, fine malted barley, and the brewers’ careful aging process. Each brew is aged in virgin oak barrels that are retired after the release.

Woodcut No. 8 has a rich malt base with notes of dried fruit that mingle with hints of toasted coconut, vanilla and turbinado sugar from the new oak. Slightly warming and sweet, the beer boasts delicate cr├¿me br├╗lée character that will evolve and mellow with age.

Woodcut No. 8 will be available in the brewery’s tap room beginning October 1st, just in time for the Great American Beer Festival┬« visitors. Woodcut No. 8 is offered in 750 ml cork and cage finished bottles throughout the breweries 11 state distribution footprint.

About Odell Brewing: Founded in 1989, Odell Brewing was started by Doug Odell, his wife Wynne, and his sister Corkie. Today, the culture of family and collaboration still thrives fostering a brewery full of beer-centric people. It is this passion for beer that inspires Odell Brewing to create quality, hand-crafted, innovative brews. As a regional craft brewery, Odell Brewing is committed to serving the communities in which it distributes by minimizing its environmental impact, sourcing local raw materials, and through its charitable giving program known as Odell Outreach. Odell Brewing was named a “Best Company to Work For” in 2013 by ColoradoBiz Magazine and is an award winning brewery, nationally and internationally: 2014 World Beer Cup┬« – gold for Runoff, 2013 Great American Beer Festival┬« – gold medal for 5 Barrel Pale Ale, 2012 Brewers Association Recognition Award, 2011 Great American Beer Festival┬« – gold medal for Friek, 2008 World Beer Cup┬« — gold for IPA. 2007 Great American Beer Festival┬« — gold medal for IPA.