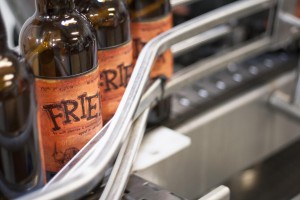 Fort Collins, CO — On October 31, 2014, Odell Brewing celebrated the return of Friek, the brewery’s beloved Lambic-style ale. Part Framboise, part Kriek, Friek is brewed with Colorado grown cherries and aged in oak barrels for several months. It is then blended with fresh raspberries just prior to packaging.

“The brightness hits your tongue, bursts of tart fruit, a slight funk, and acidity that develops as the glass warms,” said Nathan Borchelt in his 2013 review for Paste Magazine. “The wood comes through as well, controlling the vibrant flavors to create a balanced mixture of sweet and sour, without a hint of hoppiness, to deliver a smooth and refreshing finish.”

Friek is offered in a 750 ml cork and cage finished Belgian-style bottle. Limited quantities will be available throughout the brewery’s eleven state distribution region beginning in November.