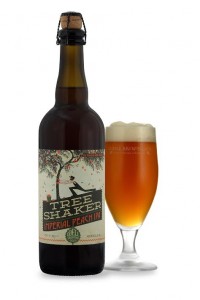 Fort Collins, CO. — On February 22nd, Odell Brewing will celebrate the return of Tree Shaker, an Imperial Peach IPA, brewed with over 3000 pounds of pureed peaches grown on the Western slope of Colorado.

Tree Shaker was a hit in its inaugural year, and the Odell Brewing crew couldn’t wait to brew it again. They began with a complex imperial IPA. Nine days into fermentation, the team spent all day adding the pureed peaches to the beer by hand. The final brew is crisp and flavorful with subtle peach notes that complement the bright citrus hop character.

Tree Shaker will be available in 750 mL, cork and cage finished bottles throughout the brewery’s eleven state distribution region. The brewery will celebrate the release of Tree Shaker in the Tap Room on February 22nd and 23rd. Guests can enjoy samples of the beer, local food truck pairings, and live music by The Matt Skinner Skinner Band on Sunday from 3:30 — 5:30 p.m.