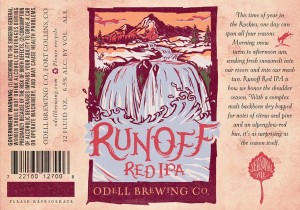 Fort Collins, CO — On January 4th, 2014, Odell Brewing will celebrate the release of Runoff Red IPA. Formerly known simply as “Red Ale,” Runoff is the same recipe with a new name and label and follows Isolation Ale as part of the brewery’s seasonal series of beers.

“We wanted to give this beer a name, story and label imagery that would reflect the spirit of the season and better coincide with our other seasonal offerings,” said Marketing and Branding Manager, Amanda Johnson-King. “We also felt that Red IPA more accurately described the character of the beer, which is a very hoppy crimson colored ale.”

The name “Runoff” is a nod to the late winter and early springtime snows in Colorado, that generate the precious water so vital to the area and to beer making. The label art also depicts the shoulder season along with a vibrant red alpenglow that mirrors the color of the beer.

Brewed with a complex malt bill, Runoff boasts a hearty backbone and a ruby hue. The brew is dry-hopped with a generous amount of American hops giving the beer a fruity citrus aroma and a kick of grapefruit and pine hop character.

Odell Brewing will celebrate the release of Runoff in the brewery’s Tap Room on January 4th and 5th. Guests can enjoy samples of the beer, special food truck fare, as well as live music by the Waido Experience on Sunday from 3:30 — 5:30 pm. Runoff Red IPA will be available in six packs and in the Winter-Spring Montage variety pack throughout the brewery’s ten state distributor footprint.