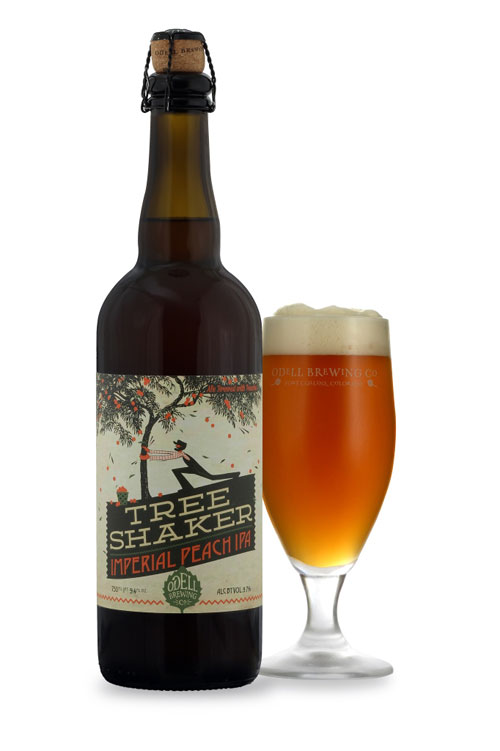 Tree Shaker was certainly a labor of love for Odell brewers. The base IPA recipe was developed and brewed, and around nine days into fermentation, the team added the pureed peaches to the IPA by hand, an all-day process. The end result is a crisp and flavorful Imperial IPA with hints of peach character from both the fruit and hops used.

Tree Shaker is offered in 750 mL, cork and cage finished bottles and will be available throughout the brewery’s ten state distribution region. Odell Brewing will celebrate the release of Tree Shaker on Saturday, April 6th in the brewery’s Tap Room. Guests can enjoy live music, local food, and samples of the new brew.

Founded in 1989, Odell Brewing was started by Doug Odell, his wife Wynne, and his sister Corkie. Today, the culture of family and collaboration still thrives fostering a brewery full of beer-centric people. It is this passion for beer that inspires Odell Brewing to create quality, hand-crafted, innovative brews. As a regional craft brewery, Odell Brewing is committed to serving the communities in which it distributes by sourcing local raw materials, and through its charitable giving program known as Odell Outreach. Odell Brewing was recently named a “Top Company of 2010” by ColoradoBiz Magazine and is an award winning brewery, nationally and internationally: 2012 Brewers Association Recognition Award, 2011 Great American Beer Festival┬« – gold medal for Friek. 2010 North American Beer Awards — gold medal for Woodcut No. 3. 2009 BrewNZ Awards — gold for 5 Barrel Pale Ale. 2008 World Beer Cup┬« — gold for IPA. 2007 Great American Beer Festival┬« — gold medal for IPA.