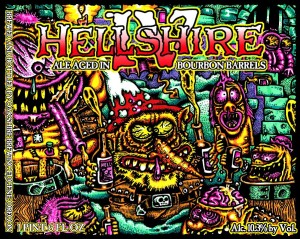 EUGENE, OR — Oakshire Brewing will release Hellshire IV, the brewery’s fourth barrel-aged beer under the Hellshire label, on Saturday, February 15th. To celebrate this release and the craft of barrel-aging, Oakshire will host Hellshire Day & Barrel-Aged Beer Fest at its Public House, on Madison Street in Eugene. The beer festival will include offerings from Oakshire’s barrel-aging cellar, as well as dozens of barrel-aged beers from breweries around the country. While Oakshire’s brewery will be open for tours during Zwickelmania that day, sales of 22 oz. wax-dipped Hellshire IV bottles will only be available at the festival at Oakshire’s Public House, beginning at 11 a.m.

Regarding the Hellshire IV release, Brewmaster Matt Van Wyk said “This year we went into our barrel cellar and put together a blend of 3 different beers matured in bourbon and brandy barrels and made a blend that we really like. We started with Very Ill Tempered Gnome as the base and made something akin to an Old Ale or Barleywine.”

Hellshire Day & Barrel-Aged Beer Fest will include live music by local bands and food served up by Oregon Wood Fired Pizza and Burgers On The Run. Entry fee to the festival will include a commemorative Teku tasting glass and sampling tokens, with more available for purchase. Breweries presently confirmed include those listed below, with more confirming daily.

Oakshire Brewing of Eugene, OR, was founded in October 2006 with the goals of brewing the highest quality craft beer while providing exceptional customer service. Oakshire has become regionally and na- tionally recognized for consistently brewing fresh, unique and delicious beers in Oregon’s lower Willamette Valley. The name Oakshire represents our core values: Strength, like the enduring oak; Inde- pendence, which fuels our innovation; and Community, remembering our place within the whole. The Oakshire Brewery is located at 1055 Madera Street and Oakshire’s Public House is located at 207 Madi- son Street, both in Eugene, OR.

Brewbound Voices: CODO Design on Rolling Out Your Brewery’s Rebrand