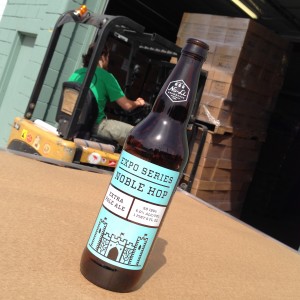 Brewmaster Mark Irvin designed the beer to be reminiscent of a lager — light and crisp, with traditional Noble hops, Saaz and Hallertau — while featuring the brewery’s American-Irish yeast blend, and fermenting the beer at ale temperatures, giving the beer a slight fruity flavor.

The Noble Hops used are sourced from the U.S., grown in the Yakima Valley in Washington.

No-Li will ship out just 600 cases of Noble Hop throughout the summer.

“Old world meets new in this internationally-inspired beer with a local twist. We used Noble

H ops, Saaz and Hallertau, grown right here in our backyard, the Yakima Valley. The beer has four kettle hop additions, and is finished with dry-hopping. This golden-hued beer reveals a classic Noble-hop aroma with a crisp finish.”