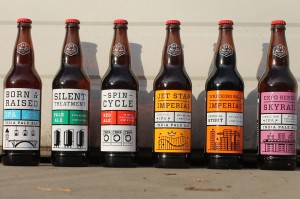 In 2013, No-Li, one of the few packaging breweries in Eastern Washington, continued to push innovation and launched several new packages and Spokane-Style beers (brewed in Spokane, by Spokanites, using ingredients sourced within 300 miles of Spokane).

New packages include screen-printed, 12 oz-bottle, Imperial Series 4-packs. New beers includes their No Boundaries Pilot Series, a creative, rotating style, brewed each month, and their Expo Series, a seasonal release that will rotate four to five times a year.

In addition to utilizing specialty beer offerings, the brewery goes to market selling one beer at a time, getting out in front of the customer every day and creating meaningful interactions to tell the brewery’s story.

“We go to market ‘the old school way;’ roll up your sleeves, get your hands dirty. This approach allows us to keep growing our brewery; in 2013, we added two new 60-barrel fermenting tanks, a 60-barrel brite beer tank, and a new, top-of-the-line filtration system,” says Brittany Dern, No-Li Marketing Manager.

The brewery brought on board a handful of beer industry-experienced employees in 2013, sourcing talent from Colorado, Oregon, Western Washington, and home-grown employees from Spokane.

In early 2013, No-Li’s owners, John Bryant and Mark Irvin, decided to offer health care to their twenty-plus full-time employees, a rare treat for a company of this size in the beer industry.

Irvin comments: “We are a people-centric organization, passionate about beer, the beer experience, and our community. Unifying our people with our mission creates pride in what we’re doing in Eastern Washington, and in the greater craft beer scene. It’s a simple formula: Beer. Brewery. People. Cheers.”