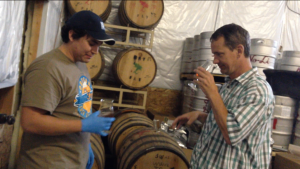 No-Li will debut Blackfill, Triticale Whiskey Barrel Aged Wrecking Ball Imperial Stout, at their small batch festival, both on draft, and in packaged 22 oz bottles. No-Li has develop a small batch, year-round, barrel-aging program, to be released in 22 oz bottles. The brewery now has over 40 wine and spirits barrels filled with beer.

“Our barrel-aging program is taking the ‘hands-on brewing aspect’ a step further. Working with the unique flavors of barrels adds another dimension to our beers. It’s the natural evolution of creativity in the brewing world, and we’re hooked!” comments brewmaster and co-owner Mark Irvin.

Guests who attend “12” receive a first taste of Blackfill, and, with only 1200 bottles produced, the first opportunity to buy the limited release in 22 oz bottles.

No-Li will feature a handful of other barrel-aged beers at the festival, as well as some other fun ingredient combinations.

For detailed descriptions of the beers please visit the event site at http://noli12.eventbrite.com.

No-Li encourages those interested in attending the festival to buy their tickets early; availability is limited and expected to sell out in advance.

For more information about the event, please visit NoLi12.eventbrite.com.