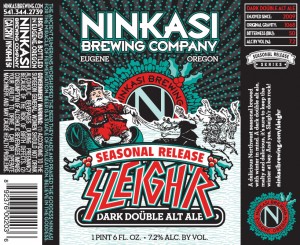 Hailing from traditional beer styles, these beers were brewed with winter in mind — dark and smooth.

Brewed in the traditional German Alt way, Sleigh’r is darker than its traditional heritage, profiling a malt-forward, dry and toasty beer from Ninkasi’s Seasonal Release Series. “Sleigh’r is a true tribute to the spirited nature of the season,” says Ninkasi founding brewer and co-owner, Jamie Floyd. “A dark, rich toasted-malt flavor is balanced by just enough hop bitterness to make this winter offering deceptively easy to drink.”

Making its way back to Ninkasi’s Special Release Series is Imperiale. This Imperial Stout offers lots of roasted malt flavor, along with a rich, smooth and warming body. “Impeirale is the perfect beer to accompany any winter gathering, pairing well with hearty foods of the season,” says Floyd.

Description: A delicious Northwest seasonal brewed with winter in mind. A dark do├╝ble alt ale, malty and delicious, it’s sure to keep the winter at bay. And yes, Sleigh’r does rock!

Tasting Notes: An alt ferments with ale yeast at colder lagering temperatures. This effect gives alts a more refined and crisp lager-like flavor than traditional ales. The do├╝ble alt means that it has been “Ninkasified.” Regular alts are 5 to 5.5 percent ABV and 40 IBUs. Sleigh’r has a deep, toasted malt flavor that finishes dry and has 7.2 percent ABV and 50 IBUs keeping it in a perfect alt balance!

Tasting Notes: Roasted malt up front, with a smooth and creamy body warming the mouth. Caramel, toffee, molasses and a touch of coffee notes are present but unified in one amazingly drinkable beer. Let us bundle you up!