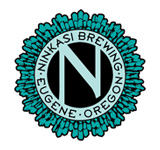 Ninkasi, named for the Sumerian Goddess of Fermentation, recently celebrated its sixth year in business and enjoys continued growth opportunity with the new territory expansion.

A Eugene facilities expansion is also underway taking the northwest brewery’s current 90,000 barrel capacity up to 200,000 in late 2013.

“Being able to finally meet grass-roots demand for our brand in the area is exciting” Said James Book, Ninkasi Marketing Director. “We’ve been active with events in the bay area for some time plus, our co-founder Jamie Floyd and some of us have NorCal upbringings.”