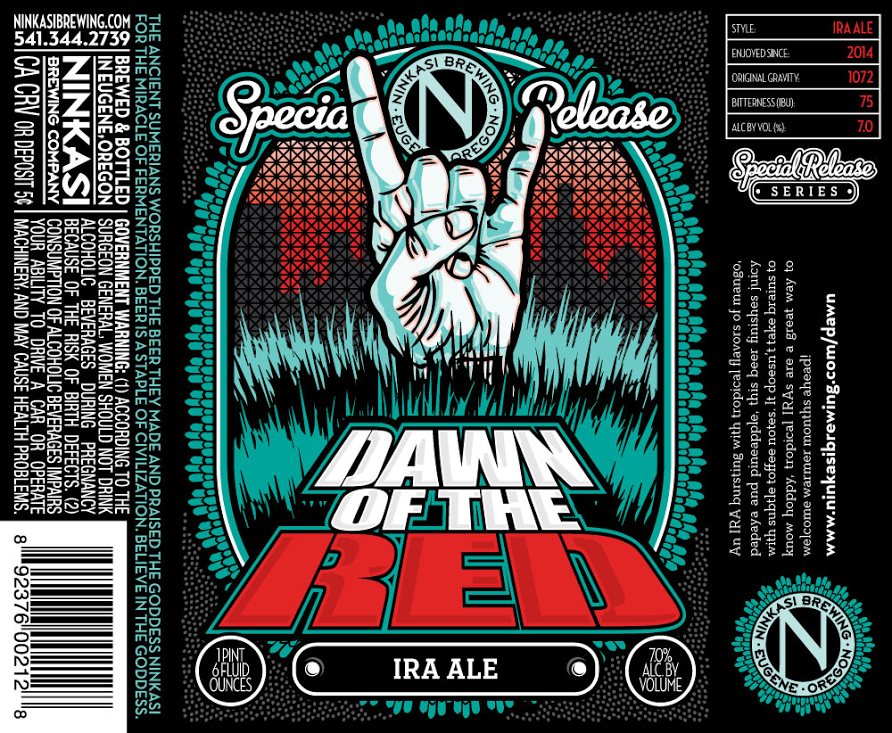 EUGENE, OR —Ninkasi Brewing Company announces the release of its Dawn of the Red, an India Red Ale, to store shelves and on-draft January through April 2014. Crafted as part of Ninkasi’s Special Release Series, this beer embodies all aspects of the creative process that goes in to each and every Ninkasi brew — from the brewing and recipe design team to its in-house art department.

“I have wanted to make an IRA for a while,” admits Jamie Floyd, founding brewer and co-owner of Ninkasi. “The idea for this beer was to make a super drinkable hoppy beer with a touch of caramel malt to bring some dryness and malt flavor into the finish.”

Ninkasi’s six-member brewing team worked together to make sure this beer possessed the right amount of color without being excessively sweet. “This beer has the bitterness and drinkability of an India Pale Ale and uses some newer hops that create a real juicy flavor profile of mangos, papaya, and pineapple,” says Floyd. “Through our sampling of this beer, it has quickly become a favorite at the brewery; at seven percent ABV, it’s a dangerously tasty beer that leaves the palate ready for more.”

On the bottle, consumers will find a label that draws from the cult classic zombie movie, “Dawn of the Dead,” a flick favored by the label’s designer and Ninkasi art director, Tony Figoli. “We’re all about mash-ups here at Ninkasi, so I thought what better than a pop-culture reference tied with a little rock n’ roll,” says Figoli.

Dawn of the Red will be available on shelves in 22-ounce bottles, in Ninkasi’s 22-ounce Variety 4-Pack, and on-draft January through April.

Dawn of the Red Stats

Description: An IRA bursting with notes of mango, papaya and pineapple, this beer finishes juicy with a subtle malty backbone. It doesn’t take brains to know hoppy, tropical IRAs are a great way to welcome warmer months ahead!

Tasting Notes: Mango, papaya, pineapple and stone fruit notes burst out with bitterness upfront. Sustained by a subtle malt-flavor, this beer finishes smooth, leaving one ready for the next sip of this flavortastic beer!