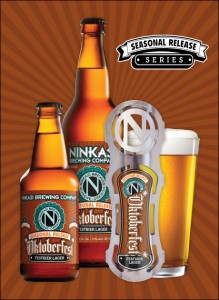 EUGENE, Ore.—Aug. 13 2014—With the approach of the harvest and cooler fall weather, Ninkasi Brewing Company announces two lagers that are rooted in European tradition and celebrate the incredible ingredients of the Pacific Northwest. Oktoberfest, the newest addition to Ninkasi’s Seasonal Release Series, and Venn, the third Prismatic Lager Series release of the year, capture all that the region has to offer: some of the purest water in the Continental United States and Northwest-grown hops.

Available September through October, Oktoberfest is a Festbier lager crafted to honor the region’s great bounty. “Festbier is a unique Bavarian lager that’s made around the harvest time, similar to an Oktoberfest, but it has what German brewers consider to have a more hoppy presence,” explains Jamie Floyd, founding brewer and co-founder of Ninkasi. “Oktoberfest has a darker hue than most lagers and a toasty malt flavor with a sweet impression up front paired with an earthy and grassy hop flavor.” Brewed with hops grown in Oregon’s Willamette Valley, these hops were selected to impart the earthy, grassy flavor of traditional German hops.

Venn, available September through December, is a balanced Dortmund-style lager providing a deliciously easy drinking option for the crisper months ahead. “The most important characteristic of this style is its balance,” says Floyd. “All ingredients must be in perfect harmony, giving the beer a Noble hop bitterness with a rounded, sweet malt flavor.”ÔÇ¿ÔÇ¿Both beers will be available throughout Ninkasi’s distribution footprint: Oregon; Washington; Idaho; Montana; California; Alaska; Nevada; and Vancouver, British Columbia.