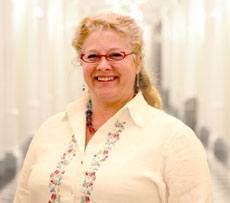 Amid the nation’s ongoing effort to stimulate job growth, one small brewer had Washington’s attention this morning.

Deb Carey, Founder and President of the New Glarus Brewing Company in Wisconsin, met with President Barack Obama, Vice President Joe Biden and 15 other small-business representatives in the nation’s capital this morning to share ideas and discuss the looming fiscal cliff.

New Glarus epitomizes small business, selling all of its 108,000 barrels brewed in 2011 within Wisconsin’s borders. It’s a much different business model than the country’s largest craft brewer – Boston Beer Company – which sold more than 2 million barrels of beer across all 50 states in 2011. And different still from the world’s leading brewer, Anheuser-Busch InBev which shipped 98.5 million barrels of beer in the U.S. alone last year.

“He didn’t call in the head of South African breweries or InBev to this meeting,” Carey said.

Carey repeated that small brewers are “on the radar,” and said that she was pleased with the president’s interest in the growing small business segment.

“The idea that this administration really values small business and that they would go out of their way to get our input and feedback, I think is very encouraging,” Carey said.

She noted that small businesses, the fastest growing job segment, create the majority of in-state jobs with the least amount of subsidies. This is equally true in the craft brewing industry, where 376 breweries have launched in the past year. The Brewers Association estimates that craft brewers currently provide 103,585 jobs across 2,263 craft breweries in the U.S.

Today’s meeting is one of several ways Obama has sought guidance from small business experts in recent months. Brian Meece, CEO of the online crowdfunding platform RocketHub, met with Obama’s Council on Jobs and Competitiveness in October.

“There is no true job growth with bigger, more established companies,” Meece said. “The government has recognized this and is being proactive in supporting entrepreneurship.”

Washington has until the New Year to resolve what could be $600 billion in tax hikes and spending cuts beginning in 2013 – enough to drag the country back into a recession.