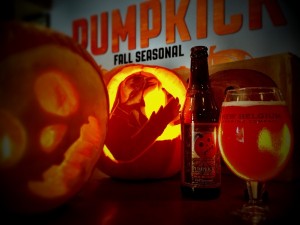 Ft. Collins, CO — With fall officially here and pumpkin beers flying off the shelves, New Belgium decided to challenge other pumpkin-beer-making, craft brewers to a carving contest. New Belgium and six craft breweries have put their knife skills to the test and the final pumpkins for The Big Craft CarveOff are on display at NewBelgium.com/CraftCarveOff. Public voting for the favorite begins October 3 and runs through October 15 at Eater.com. New Belgium will donate $5,000 to a charity of the winner’s choice.

“There’s a proud tradition of pumpkin beer brewing every fall among craft brewers and we figured a great way to celebrate the change of seasons is a good old-fashioned carving contest” said New Belgium Spokesperson, Bryan Simpson. “Several of our brewing buddies jumped on board and did amazing, magical feats to transform simple gourds into works of art.”

New Belgium’s carved entry celebrates its current seasonal release, Pumpkick Ale. Pumpkick is brewed with plenty of pumpkin, cinnamon, nutmeg and allspice, but it is the healthy dose of cranberries that really makes it stand out.

“It was a little tricky for some breweries to find pumpkins this early in the season, so we actually had to ship some from Fort Collins,” added Simpson. “The results speak volumes as to how many creative folks we have in our industry. Pretty inspiring. ”

New Belgium Brewing, makers of Fat Tire Amber Ale and a host of Belgian-inspired beers, is recognized as one of Outside Magazine’s Best Places to Work and one of the Wall Street Journal’s Best Small Businesses. The 100% employee-owned brewery is a Platinum-level Bicycle Friendly Business as designated by the League of American Bicyclists, and one of World Blu’s most democratic U.S. businesses, and a Certified B Corp. In addition to Fat Tire, New Belgium brews eight year-round beers; Ranger IPA, Rampant Imperial IPA, Shift Pale Lager, Sunshine Wheat, 1554 Black Ale, Blue Paddle Pilsener, Abbey Belgian Ale and Trippel. Learn more at www.newbelgium.com.