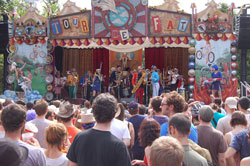 FT. COLLINS, CO. – If you haven’t experienced Tour de Fat, you just haven’t had enough fun on two wheels. In its 12th season, New Belgium Brewing’s traveling celebration of all things bicycle will make its mark on 13 cities this year, singing the praises of the bike life while raising funds for local non-profits.

Volunteers are chosen after submitting an application describing their desire to live sans-car. To submit, go to the New Belgium Tour de Fat Facebook page, click on events and your city of choice, and upload your application in one of three formats: video (two minutes or less, please), photo or the written word.

“The car-for-bike swap epitomizes Tour de Fat, wherein one brave soul makes the commitment to live car-free while inspiring others to think about driving alternatives,” said Bryan Simpson, spokesman for New Belgium. “We’re building a network of folks who originally said they’d leave their car behind for a year, but are still living car-free today.”

Tour de Fat kicks off in Durham, NC on June 25 and wraps up in Austin, TX on October 22.

See http://www.facebook.com/TourDeFat for the Tour de Fat credo, schedules, videos and to submit your entry to swap your gas guzzler for a shiny new bicycle.

Tour de Fat 2011 will cycle through each of the following cities: