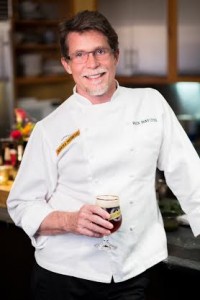 One lucky winner will get to bring three friends on a three-day culinary tour of Chicago in 2015 as part of a Negra Modelo promotion administered solely by the brand. Fans 21 and older can enter by visiting NegraModeloUSA.com starting Oct. 1 through Oct. 31.

Negra Modelo, one of many Mexican beers in the Constellation Brands family, dates back to 1925 and gets its distinct taste from slow roasting caramel malts. This technique makes the brewing process last twice as long as other beers, deepening the flavor.

“Throughout my travels in Mexico and Latin America, I’ve learned that savory, spicy food needs a strong beer to help balance its boldness,” Bayless said. “With its truly unique, rich flavor, Negra Modelo is the perfect complement for a variety of Mexican dishes.”

As part of his partnership with the brand, Bayless has created exclusive recipes that pair perfectly with Negra Modelo, from Roasted Tomato and Negra Modelo Steamed Mussels to Negra Modelo Slow-Braised Beef Short Ribs.

The recipes are featured on the brand’s new website, which describes the connection and complementary relationship between good beer and good food. The new digital presence encourages people to describe #theperfectcomplement to their beer on social media and share their own food/beer pairing ideas.

“Negra Modelo beer, combined with great local fare, creates a fiesta of flavor that few other beers are able to live up to,” Bayless said. “This partnership allows me to not only give foodies a taste of how to enjoy the best beer, but also inspire them to share their own complement to Negra Modelo, from a homemade Brava steak dish to an unexpected night out with friends.”

Rick Bayless is chef and founding owner of four critically acclaimed and wildly successful Chicago restaurants. His award-winning Frontera line of salsas, cooking sauces, and chips can be found coast to coast. Rick has won multiple James Beard awards, including National Chef of the Year and Humanitarian of the Year. Rick’s highly rated PBS cooking show, Mexico—One Plate at a Time, is in its 9th season. In the show Bravo’s Top Chef Masters’ premiere season, Rick was crowned winner. www.rickbayless.com