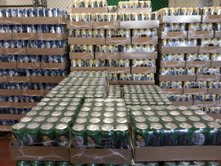 PORTLAND, Ore. — Natian Brewery, a three year old microbrewery located in Portland, Oregon, is happy to announce that their Pacific Northwest ales will be ready for retail sale throughout Pennsylvania by early May.

Earlier this year, Natian Brewery reached a distribution agreement with Schnecksville, PA based Nevulis Beverage for statewide distribution of its entire product line. Natian will be supplying Nevulis with its Undun Blonde Ale, Old Grogham Imperial IPA and CuDA Cascadian Dark Ale. All three varieties will be available in 16oz cans, kegs and variety cases. Naitan and Nevulis hoped to begin distribution sooner, but the process was delayed while Natian upgraded its product packaging. Natian Brewery just received their newly pre-printed “Pint In A Can” 16 ouncers and has been working hard to fill them with delicious Oregon beer for your enjoyment. The first shipment is set to leave Portland April 24th and will be ready for Pennsylvania retail shelves the following week.

Natian owner and head brewer, Ian McGuinness, spent his formative years growing up in Central Pennsylvania until graduating high school. He then moved out west with his family, where he lived and attended college in New Mexico, before finally settling in Portland in 2005. Ian still has many good friends in Pennsylvania and he always hoped to be able to share his beer with them someday. This is a way for him to realize that dream and grow the brewery at the same time. It’s really a win-win opportunity as Pennsylvania beer lovers will now be able to enjoy craft beer from the Pacific Northwest, one of America’s best brewing regions.

Natian Brewery is a micro-brewery located in Portland, Oregon. Founded in 2009 on a 1bbl brew system, they’ve recently expanded the brewery and upgraded to a brand new 10bbl system. Natian Brewery was the smallest brewery represented at the 2010, 2011 and 2012 Oregon Brewers Festival. In the spring of 2012, Natian was the very first brewery in Portland, Oregon to begin selling its beer in cans. They currently offer Old Grogham Imperial IPA, CuDA Cascadian Dark Ale, Undun Blonde Ale and Lumberjane Stout year round in the Portland Metro area.

To learn more about Natian Brewery visit their website, www.natianbrewery.com. About Nevulis BeverageNevulis Beverages is a wholesale importer and distributor of artisan craft beer that services all of Pennsylvania. They love bringing new brands to market and working with their breweries to build them into top level brands. With the belief that “Knowledge is Power,” the Nevulis approach is focused on informing and educating the consumer with the belief that the more a person knows about their beer, the more passionate they will become.