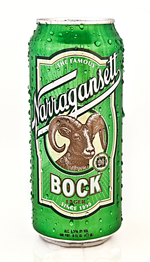 PROVIDENCE, RI — The Famous Narragansett Beer announces the seasonal release of its spring craft brew, Narragansett Bock. A silver medal winner at the 2011 World Beer Championships, Bock will be available on draught and in ‘Gansett’s signature 16oz. Tallboy cans.

Narragansett Bock is brewed under the supervision of award-winning Brewmaster Sean Larkin at Trinity Brew House in Providence, RI and Cottrell Brewery in Pawcatuck, CT with light and dark Munich malts, Pilsner malt, Malted Wheat, and hopped with Northern Brewers and Hallertau hops. A traditional Bavarian helles lager beer, Narragansett Bock is deeply flavorful with a rich golden color and full body. Drier, hoppier, and slightly more bitter than a traditional bock, it still has a relatively low hop flavor, making for an extremely approachable craft experience. Narragansett Bock is 6.5% Alcohol by Volume and 32 IBUs.

Narragansett Bock originally debuted in the 1930s after the repeal of Prohibition. Its popularity grew quickly due in large part to the annual Bock Beer Festivals held on the brewery’s grounds each spring. The English translation of ‘Bock’ is literally ‘ram,’ and is the reason that the ‘Gansett ‘Bock Tallboy can features the animal in paying homage to German lore surrounding the beer’s history. Many believe the brew’s name originates from the abundance of billy goats that descended from the mountains in spring when the beer was brewed, while others claim that the term was used metaphorically to reference the strength of the beer.

For further information on Narragansett Bock or to find a retailer near you, visit:

Narragansett BeerÔÇª. Brewed since 1890, ‘Gansett is a straight-forward, quality beer that has been a New England tradition for generations, producing a classic family of award winning American lagers & ales. Today, ‘Gansett is produced at top-rated breweries in Rochester, NY and Latrobe, PA, with their craft brews being produced in Providence, RI and Pawcatuck, CT. Narragansett Lager is available for purchase in local restaurants, bars, and liquor stores throughout New England, Southern New York, Eastern Pennsylvania, Western North Carolina, and Florida.