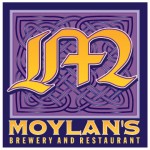 NOVATO, CA – Moylan’s Brewing Company is Champion Exhibitor of the 19th Australian International Beer Awards (AIBA), a beer competition whose global reputation has been reinforced by a panel of judges consisting of some of the industry’s most esteemed personnel. 13 international judges were added to the original panel of 44 and 1195 entries from 34 countries were received.

Brendan Moylan states, “Thanks to Denise Jones and the Brew Crew at Team Moylan’s. We are very humbled by this incredible honor awarded to us by the Australian International Beer Awards.”