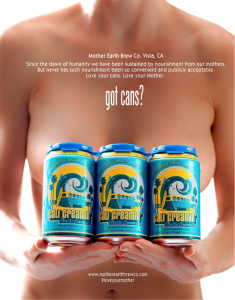 “It has always been our desire and overall strategy to get into a 12oz. format and we feel that cans offer the most flexibility and attraction to our consumer” says Dan Love, Co-Founder and CEO of Mother Earth. “We started planning this launch early this year and I am extremely excited that the day has finally arrived!”

According to Kevin Hopkins, Mother Earth’s Chief Branding Officer, this is just the beginning:

“Cans are a major part of Mother Earth’s future and Cali is leading the way. Additional releases are already planned for 2015 that will create a well-rounded selection of our most popular beers and in styles that appeal to the broad market.”

Advertising for “Cali Cans” starts today with the “Love your cans, Love your Mother” campaign that will be seen in print publications, on signage and of course via the Internet. In addition, Mother Earth has rolled out a new custom labeled “Crowler” at their Main St. Tap House. The new “Crowler” allows visitors to purchase 32oz. of their favorite Mother Earth offering that is “filled to order” in a 32oz. can right in front of them.

Cans of Cali Creamin’ started shipping mid-September and are available on store shelves now. Find them wherever Mother Earth is sold and never forget to… #loveyourmother

Founded in 2010, Mother Earth Brew Co. develops hand crafted artisanal ales in both year-round, as well as seasonal and specialty offerings. Its award winning beers help define the standard of West Coast Craft and has led to year over year compounded growth of well over 100% since their inception. With two tasting locations within the City of Vista including a large Tap Room that anchors the historic Downtown Vista Village District as well as multi-state distribution, Mother Earth is proud to be a part of the San Diego craft scene and to be considered one of the area’s premier craft breweries.