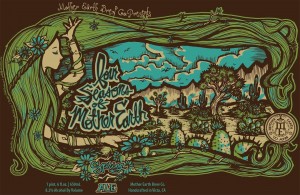 Released every Spring, Summer, Autumn & Winter on the appropriate equinox or solstice, “Four Seasons” represents the most exclusive and rare beers that Mother Earth offers.

And to kick the season off right, today is the first day of “Spring,” for this year only, known as “Printemps Houblon’ale” or “Spring Hop Ale.”

This year’s “Spring” is the result of Mother Earth’s collaboration with Brasserie du Pays Flamand who joined Mother Earth at their Vista brewing location earlier this year to create this one time offering.

Four Seasons “Spring,” is styled as a Belgium Tripel using traditional pale malts, yeast and Belgium candy sugar, then slowly fermented in the classic style. To give this beer a little “West Coast” flair, sweet orange peel was added to the brew and it was then dry-hopped with Mosaic hops giving it a mild orange citrus zest to round out the familiar yeast esters.

Bottles of Four Seasons – “Spring” are available in all states where Mother Earth beer is sold, as well as in extremely limited draft. “Spring” or “Printemps” is suitable for cellaring so that just as it is in Europe, you can re-visit spring, time and time again. As part of the collaboration with Brasserie du Pays Flamand, bottles of “Printemps” will also be available in France.

Next year, “Four Seasons – Spring” will return, but with an entirely new beer featured under the same label.

Look for Mother Earth’s next “Four Seasons” release, “Summer” on the coming solstice, June 21st. “Summer” will be the first of two barrel-aged bottled offerings that Mother Earth plans to release this year as part of their annual “Four Seasons” program.

So celebrate the coming of “Spring!” And never forget to… #loveyourmother

Founded in 2010, Mother Earth Brew Co. develops hand crafted artisanal ales in both year-round, as well as seasonal and specialty offerings. Its award winning beers help define the standard of West Coast Craft and have led to year over year growth of over 100% since inception. With two tasting locations within the City of Vista including a large Tap Room that anchors the historic Downtown Vista Village District as well as distribution in three states, Mother Earth is proud to be a part of the San Diego craft scene and to be considered one if its premier craft breweries.