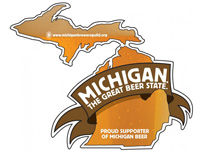 BELLAIRE, MI – The Michigan Brewers Guild recently elected its 2012 Board of Directors at its annual meeting, January 12, at Shanty Creek Resort in Bellaire. Each board position is a two-year term, elected in alternating years (3, 2).

Michigan’s thriving brewing industry conservatively contributes more than $24 million in wages with a total economic contribution of more than $133 million. In terms of overall number breweries, microbreweries and brewpubs, Michigan ranks #5 in the nation — thus supporting its claim as “The Great Beer State.”

The Michigan Brewers Guild exists to unify the Michigan brewing community; to increase sales of Michigan-brewed beer through promotions, marketing, public awareness and consumer education; and to monitor and assure a healthy beer industry within the state. For more information, including a list of Michigan microbreweries, log on towww.michiganbrewersguild.org.