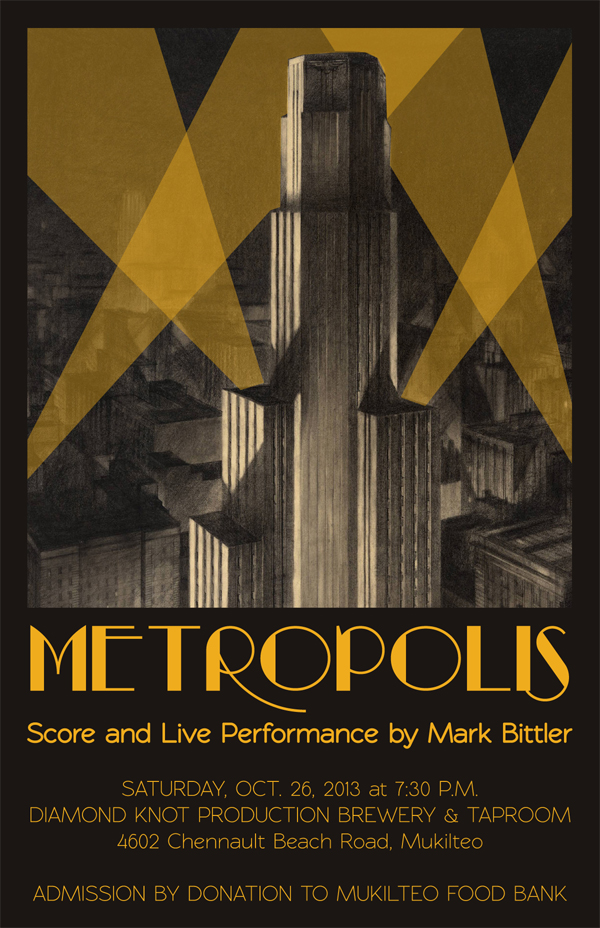 MUKILTEO, WA — It’s been just about 10 years since Diamond Knot and Chehalis musician Mark Bittler paired up and presented a live, original score to “Metropolis,” the famed 1927 silent film. First played at the Diamond Knot Brewery & Alehouse in 2003, Bittler is excited to once again “Wow!” viewers with his score.

The show, scheduled for 7:30pm Saturday, Oct. 26 at the Production Brewery & Taproom, will benefit the Mukilteo Food Bank. The show, itself, is free, with monetary and canned food donations gladly being accepted. Diamond Knot will provide the popcorn, and beverages will be available for purchase.
DK: So where did you come up with the idea to write a score for this dark film?
Bittler: Brian Sollenberger (DK co-founder) and I used to sit around and talk about our love of silent films. He asked me to write some scores so DK could show them back in the late ’90s. He really wanted Metropolis, so I said, “Sure.” It was one of my favorite childhood movies.
DK: How long did it take you to write the score?
Bittler: It took about two months to write the 2-hour long piece.
DK: How will watching Metropolis with your score be different than watching the movie, say, at home?
Bittler: First, viewers get to hear the music live. I watched the movie and made notes to follow not only what was happening in the film, but also what the characters were doing. I created musical themes for each of the characters. This film is probably the first sci-fi film ever created, so my music is more electronic with synthesizers and samples.
DK: What was your favorite part about writing the score?
Bittler: It’s definitely watching the reactions of the movie viewers as they watch and hear the score played live. My score is pretty strong, which creates an immediate effect. This will be played at a high level.
DK: You obviously have a lot of musical talent. Is this what you do for a living?
Bittler: Although I don’t make my living from playing music, I’ve been playing professionally since I was about 7. I’ve played in many bands, and still play in Bump Kitchen. We used to play all the time at the Alehouse when there was live music.
Bittler has been a long-time fan of the Diamond Knot beer lineup, as well as the DK family. When asked to create a score for several movies, he jumped at the chance to create memorable events at Diamond Knot. Whether it was playing music in the back of the Alehouse or simply volunteering to pour beer at one of our many festivals, Bittler has always been a friend of brewery.
Directed by Fritz Lang, Metropolis is considered the first true science fiction movie to hit the screen. It depicts a futuristic city divided between the working class and the rich, who lead a charmed utopian life. When a son of one of the city planners sets out to help the working class, all hell breaks loose when he falls in love with a woman destined to expose the city’s dark secret. For more info about the movie, head to www.imdb.com/title/tt0017136/. For info and directions to the Taproom, visit diamondknot.com.
The Production Brewery & Taproom is located at 4602 Chennault Beach Rd., B2, Mukilteo. For info, call 425-355-4488.