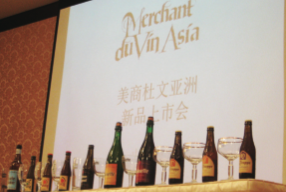 Xi’an, Shaanxi, China – Merchant du Vin is pleased to announce that MdV-Asia Ltd., a beer importing company based in Hong Kong and selling throughout China, Taiwan, and Hong Kong, has added three world-renowned breweries to its portfolio: Du Bocq, Dupont, and La Trappe.

After four years of increasing sales of Samuel Smith, Ayinger, and Xingu in China, the official launch for these additional beers was held in Xi’an, China, on September 16, 2013. Appointed distributors from across China and media met for an official introduction, beer education, brand training, and excellent dining combined with a chance to spend time face-to-face.

Representatives from Du Bocq Brewery (Purnode, Belgium), Dupont Brewery (Tourpes, Belgium), and La Trappe Brewery (Tilburg, Netherlands) were on hand for an expert presentation of each brewery’s history, culture, and technical aspects – as well as a guided beer tasting. The launch included a four-city tour with introduction parties in several on-premise accounts. MdV-Asia Ltd. General Manager Samson Lo noted, “Over the past four years, Merchant du Vin-Asia has expanded to sell Samuel Smith’s, Ayinger and Xingu in over 40 cities in China, plus Hong Kong and Taiwan. To support the rapid growth in demand for specialty import beers, we have introduced world-classic beers from Belgium, the Netherlands and Brazil to Chinese consumers. We keep our optimistic view and show confidence in the long-term growth of specialty import beer in Greater China and the Asia-Pacific region.”

MdV President Rich Hamilton said, “We’re excited to watch the growth of this dynamic beer market. We have built sales using the same fundamentals that have proven so successful over the past 35 years in the US: commitment to product quality, focus on beer education, and exemplary customer service.”

The people of China have shown their support in the most sincere way possible: customers have been delighted to find Du Bocq, Dupont, La Trappe, and Xingu now alongside their favorites from Samuel Smith’s and Ayinger: sales have already surpassed the initial forecasts!