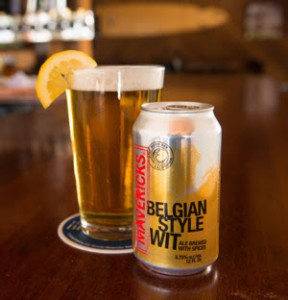 Half Moon Bay, Calif. — Mavericks Brewing, an independent craft brewery devoted to creating innovative premium American craft beer in cans, is launching this month in Northern California. Mavericks Brewing is initially unveiling a line of three beers designed to provide maximum flavor and mouthfeel with an alcohol level of just 3.75%. Southern Wine & Spirits, the largest distributor in the United States, is now distributing the Mavericks Belgian Style Wit, Rye Pale Ale, and Chocolate Porter in six-packs of cans and in both 1/2 barrel and 1/6 barrel kegs to Beverages & More and many other retail and on-premise accounts.

Mavericks Brewing takes its name from the legendary big wave surf spot and invitational surfing contest which is located directly offshore from the host brewery, the Half Moon Bay Brewing Company, and is widely considered to be the most exclusive and daring in the world. Head Brewer Shane Aldrich leads the Mavericks Brewing team, with assistance from James Costa, Brewmaster at Half Moon Bay Brewing Company. With a combined total of more than 30 years of hands-on brewing experience at such legendary companies as Bear Republic (Racer 5 IPA), Moylan’s (Kilt Lifter Ale), and Lagunitas (Lagunitas IPA), this brewing duo bring their incredible knowledge, history of creating award-winning beers, and deep passion for innovation to Mavericks Brewing.ÔÇ¿ ÔÇ¿“I am extremely excited to unveil these first three beers from Mavericks Brewing in cans just in time for summer,” said Head Brewer Shane Aldrich. “As an avid outdoorsman, I wanted to create low alcohol craft beers that can be enjoyed anywhere from the beach to rafting down a river to a family barbecue. Mavericks is the ideal choice for those who crave flavorful beers but also lead active outdoor lifestyles.”ÔÇ¿ ÔÇ¿The initial three beers in the Mavericks product lineup all provide full-flavored craft beer drinking experiences, but with an alcohol level of just 3.75%.

Mavericks Belgian Style WitÔÇ¿Wit or “white,” this beer is classically brewed with barley and wheat malt. Sweet and bitter orange peel, a hint of lemon, and coriander spice up this unfiltered Belgian style beer. (122 calories, 21 IBUs)

Mavericks Rye Pale AleÔÇ¿ An American Pale Ale using traditional west coast hops. The use of Rye malt gives this beer a strong spicy aroma while still allowing the floral characteristics of the hops to shine through. (135 calories, 53 IBUs)

Mavericks Brewing is harnessing this spirit of adventure by presenting its inaugural line of retail beers only in cans. Canned beers are eminently portable, offer superior freshness protection, are lighter and allowed in many places glass bottles are not, and are an environmentally friendly option that is easily recyclable. While all craft beer grew 20% in sales in the U.S. in 2013, cans grew 54% and are the fastest growing packaging type.ÔÇ¿ ÔÇ¿Mavericks Brewing is led by CEO Steve Morgan, who has held leadership positions at Napa Smith, Beringer, and Gallo of Sonoma. Morgan’s decades of experience with distributors from all 50 states and close relationships with craft beer industry leaders makes him ideally poised to lead and grow the Mavericks Brewing line of beers into a widely distributed brand.ÔÇ¿ ÔÇ¿Active community engagement is a key aim for Mavericks Brewing. The company is partnering for its launch with the Surfrider Foundation, a non-profit environmental organization dedicated to the protection and enhancement of the world’s waves and beaches through conservation and activism.