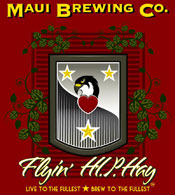 MAUI, HI- Maui Brewing Co. announces the official release of their first limited edition, packaged product, Flyin’ HI.P.HAY. The release is scheduled for May 7th; this special beer is a tribute beer for the late Glen Hay Falconer who was a mentor and best friend to MBC head brewer, Scott Freitas.

A mainland, West Coast release will follow in mid-May, appropriately starting in Oregon. Only 2000 cases will be produced and these will be distributed across eight states and three countries.

Flyin’ HI.P.HAY is an India Pale Ale, brewed with Falconer’s Flight hops, which are a hop blend of several varieties of commercial and experimental hops commonly found in IPA style beers. The base is 2-Row malted barley along with Crystal, Munich, and Dextrin malts. ABV is 6.8% and IBU is 68.

This commemorative beer will be released in cans and partial proceeds will be donated to the Glen Hay Falconer Foundation, a non-profit organization whose mission is to contribute to the Northwest craft brewing community by providing opportunities for professional and aspiring brewers to further their knowledge and expertise.