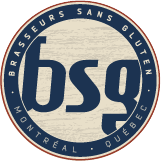 Montreal, Quebec, – The BSG Brewery and the Massachusetts Beverage Alliance (MBA) are proud to announce the launch of gluten-free Glutenberg beers in Massachusetts. This news is even more important for Glutenberg because the launch is the young brewery’s first foray on American soil. MBA will be BSG’s partner of choice, both as Glutenberg’s Massachusetts’s distributor and US importer.

Glutenberg is the brewery’s trademarked brand. BSG is a young and dynamic Montreal-based microbrewery. It’s the only brewery in Canada, and one of the only breweries in the world, that is completely devoted to the production of gluten-free beers. BSG snagged three awards in the “Gluten-free beer category” at the 2012 World Beer Cup: the gold award for its Glutenberg Red, the silver award for the Glutenberg American Pale Ale and the bronze award for the Glutenberg Blonde. It was the first time a brewery won all three awards in a single category at this prestigious competition.

“When we saw that BSG swept the Gluten-free beer category at the 2012 World Beer Cup, we made a call to the brewery right away. The Gluten-free category is growing rapidly in Massachusetts and we needed a Gluten-free beer that we could compete in the marketplace with. After talking with folks at BSG we realized that there was an opportunity to represent the brewery as a distributor in Massachusetts and as an importer. Once we tried the beer, we felt right away that we had a winner on our hands! We decided to partner with BSG and are looking forward to providing the best tasting Gluten-free beer to our customers,” said Brian Murphy, director of sales and marketing at Massachusetts Beverage Alliance.

Glutenberg beers are brewed with care in a controlled environment, using 100% gluten-free ingredients such as millet, buckwheat and quinoa. Thanks to top-notch quality ingredients and BSG’s unique and innovative brewing techniques, Glutenberg offers a variety of beers unequaled in their category.

‘‘The initial idea was not only to produce the best gluten-free beers in the world, but to make the best possible beers — period. Because I’m gluten intolerant, I was very knowledgeable about the market and I knew we had an enormous opportunity. We couldn’t be any prouder of what we’ve accomplished until now,’’ said BSG CEO and co-founder Julien Niquet.

The introduction of Glutenberg beers on the American market coincides with the brewery’s adoption of cans for packaging. The Glutenberg Blonde, the American Pale Ale and the Red will be available in 16 oz. cans

‘‘The can was a natural choice since this packaging has all the advantages for exporting. Besides considerably improving product preservation, cans are lighter and thus cheaper to transport. Most importantly, we found the can would improve our product’s look and make it more appealing on the shelves,’’ said BSG co-founder and Chief Business Development Officer David Cayer.

The first crates left Montreal on March 29 and should land on American shelves in the second week of April in the States of Massachusetts, Vermont and Maine. Other Northeastern States will progressively be added during the coming months.