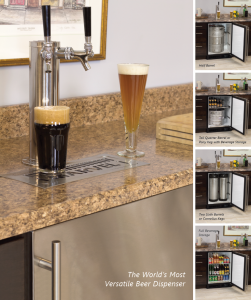 Greenville, Michigan — Already considered the most versatile high-performance beer dispensers available, Marvel recently announced dramatic innovations that mark this next generation of Marvel built-in and mobile beer dispensers as even more rich in features than before.

Up to 40% more efficient than previous models, Marvel beer dispensers are engineered with Dynamic Cooling Technology for the industry’s most superior temperature stability and rapid cool down.

“Other manufacturers advertise ‘sweaty towers’ as a visible testament to cooling performance, when more accurately it is a sign of poor insulation and higher energy consumption,” explains Robert Turnbull, senior engineer for the product line.

“We focused on cooling power and precision and minimizing foam on pour while also conserving energy—an important design feature considering the impact we can have on reducing homeowners’ annual energy costs over competitors’ products.”

Marvel remains the only ENERGY STAR® rated beer dispenser on the market that can effectively store and cool a half barrel keg, in addition to a multitude of other configurations, including tall quarter barrel or pony keg with beverage storage, two sixth barrels or Cornelius kegs, and full beverage storage. What’s more, the temperature can be set to also store perishables, like a true refrigerator.

“Marvel is the choice of beer enthusiasts and cicerones alike,” brand manager Leah Clark affirms.  “It’s a choice in good taste that ultimately rewards with the most value, versatility and performance.” She owns a mobile twin tap model.

Marvel beer dispensers start at a retail price of $1,799 and are available through a network of AGA MARVEL dealer showrooms across North America. Visit agamarvel.com/beer for more details.

Marvel products are engineered, hand-built, tested and inspected against stringent quality standards in the AGA MARVEL manufacturing facility based in Greenville, Michigan.

AGA MARVEL is a North American subsidiary of AGA Rangemaster, a leading international premium consumer brands group which manufactures and distributes some of the best known and loved kitchen appliances and interiors furnishings in the world, including AGA, MARVEL, Heartland, La Cornue, Waterford Stanley and Marvel Scientific. The company employs nearly 200 Michigan workers.  More information about all AGA Marvel products can be found at www.agamarvel.com.