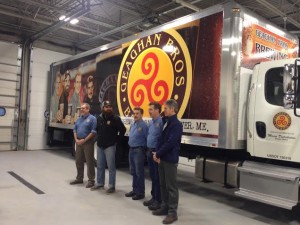 “The unveiling of our brand new Geaghan Brother’s Delivery Truck symbolizes the beginning of our new partnership with the Geaghan’s. The design of this truck took months and it looks absolutely spectacular! Soon to be delivering Geaghan Brother’s delicious brews throughout our region.” said Scott Solman,President of Maine Distributors.

The Brewer beer brewing facility is expected to finish construction in the next few weeks and start making beer by next month. The Brewer brewery will have a 20/40 barrel system, a large capacity upgrade from the 5/10 barrel system currently being used at Geaghan’s Pub & Craft Brewery in Bangor. The increase in capacity will allow for more distribution, and bottling that is expected to start in the first quarter of next year. The brewery in Bangor will still be operational to meet the demand from the Pub and serve as a test kitchen for testing new beer recipes.

“It is exciting to see our project nearing completion. In the next few months we will begin to roll beer out the doors, and we are glad for relationship with Maine Distributors and our partnership to bring another quality craft beer to Eastern and Northern Maine.” said Andrew Geaghan, Owner and Co-Head Brewer.

The truck is the first locally distributed craft beer truck in the region.