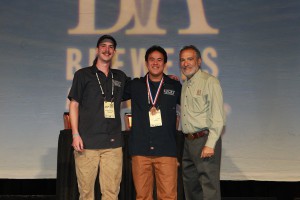 “We are still in disbelief about winning a GABF medal for our Helles Lager.” says Barry Chan, Brewmaster and Co-Founder of Lucky Envelope. “The fact that the award came less than five months after we opened our doors to the public is overwhelming and, to be honest, just plain nuts. We were honored to be recognized amongst a crowd of nearly 6,700 beers entered. There was plenty of celebration, but now it’s back to work to continue innovating and creating the best beers possible.”

The 2015 GABF competition winners were selected by an international panel of 242 expert judges from the record number of 6,647 entries, plus 91 Pro-Am entries, received from 1,552 U.S. breweries.

Presented by the Brewers Association, GABF is the largest national beer competition that recognizes the most outstanding beers produced in the United States. The top three winners in the competition’s 92 beer categories were announced September 26th at the Great American Beer Festival awards ceremony held at the Colorado Convention Center in Denver, Colorado.