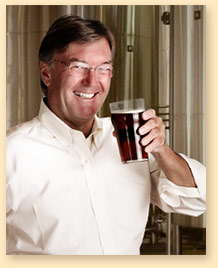 About two weeks before the Craft Brewers Conference in Washington D.C. in March, Brew Hub founder Tim Schoen called Paul Gatza, director of the Brewers Association. Schoen, the former Anheuser-Busch executive, wanted to inform Gatza, his old friend, of his Brew Hub concept before the press bombarded him with calls. The Wall Street Journal would break the story just a few days later. As people tend to do during walkthroughs, Gatza flipped ahead a few pages, interrupted Schoen and, according to Paul Byrne, who handles PR for Brew Hub, said: “You got Farnsworth? Oh my God!”

Paul Farnsworth, the chief brewer for the Brew Hub, a contract brewing service that recently signed a lease in Lakeland, Fla., for its first brewery site, will oversee the operation’s design, layout, construction and day-to-day operations. He’s also a core piece that Schoen, the Brew Hub founder and former Anheuser-Busch executive, believes will add to his company’s allure for potential clients.

Farnsworth was born in the English brewing town of Burton-on-Trent and received early training in a 200-year-old ale brewery. He earned a bachelor’s degree and a Ph.D. from the University of London, and has taught brewing, fermentation science and biotechnology for the past 30 years. He’s recently been the co-owner of Pedernales Brewing in Fredericksburg, Texas, and brewmaster at Nexus Brewing Company in Albuquerque, and has served varying roles at Marble Brewing, also in Albuquerque, Four Peaks Brewing in Tempe, Ariz., and Bohemian Breweries International in Redondo Beach, Calif. He’s also the director of Scientific Services, a brewing science laboratory that provides troubleshooting and quality control services to breweries nationwide.

Schoen said that Farnsworth showed interest immediately after they met and he first heard the Brew Hub idea. Farnsworth told Schoen that the craft brewing industry had been waiting for an idea like this for decades.

“That struck me,” Schoen said. “This guy gets it. He knows what our vision is, and he’s really a great, wonderful guy to work with.”

After spending two years analyzing the southeast, Schoen said that Florida became a logical choice because of logistics and population. He then studied about 40 different sites, some existing buildings, some green fields, narrowed his search to three sites, and identified Lakeland, which sits about 35 miles east of Tampa and about 55 miles southwest of Orlando, as a desirable location because of its interstate access, water, the willingness of the municipality — and the fact that there are about 8.5 million people in a 100-mile radius.

“Most of those are beer drinkers,” Schoen said.

“We want to create a craft brewing network that reaches 70 percent of all beer drinkers within a 300 mile radius,” Schoen said.

Brew Hub is aiming to provide a different kind of contract brewing experience than other contract brewers. Some breweries view contract brewing as taboo. Brew Hub wants to celebrate its partnerships with breweries through marketing efforts, heavily branded taprooms within each brewery, and the message that each client has formed a top-class partnership. Schoen said that he’s already had discussions about exports with several European countries, Australia, China, Sri Lanka and others. He sees this complete package as a way to draw a strong list of clients and shift the perception of contract brewing.

“It’s going to be a brand enhancement to brew at the Brew Hub,” Schoen said, “opposed to a silent contract brewing situation.”