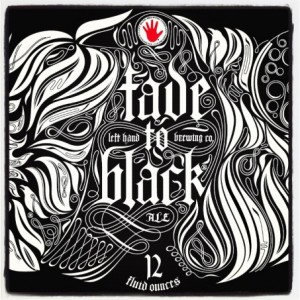 LONGMONT, CO — Fade to Black. That time of year when the light fades away. Brewed for the darkness, Fade to Black speaks in volumes, introducing a new volume each year in Left Hand’s renowned winter series. The fifth year — calls for something specialÔÇª Left Hand is bringing the first four volumes back to life alongside the volume 5 release!

The Fade to Black series first entered the market in 2009 with the introduction of Volume 1 — Foreign Export Stout, bringing home a Gold medal at the Great American Beer Festival in its first year. The following years have introduced Volume 2, a handsmoked Smoked Baltic Porter in 2010, Volume 3 — Pepper Porter in 2011 featuring Chipotle, Serrano, & Ancho chiles, all deseeded by brewery hands and last year’s Volume 4 — Rocky Mountain Black Ale. All four styles have been re-brewed and packaged for the 2013 winter season. In its first return since 2009, Volume 1 took GABF gold again making it a double medaled beer!

In addition to the revival of Fade to Black Volumes 1-4, Left Hand has also released Volume 5 — Black Rye Ale, the newest installment in the winter series. Volume 5 boasts a deep dark brown ale with aromas of dark coffee, and Maplewood. The rye ale’s flavor is an intense evolution that starts off with nut bread and molasses, landing on spicy rye notes all before being washed away by earthy hops, leaving behind a slightly black pepper sensation.

A Fade to Black variety 12-pack of the Volumes 1-4 is available throughout Colorado. For Left Hand’s out of state markets, the brewery is distributing draft run-offs of the four volumes. Volume 5 is available in six packs and on draft nationwide.

Malt smoked by hand at the brewery

Notes: Sweet and toasty aromas of bread pudding are balanced by further notes of tar, licorice and black strap molasses.

Notes: The rye ale’s flavor is an intense evolution that starts off with nutbread and molasses, landing on spicy rye notes all before being washed away by earthy hops, leaving behind a slightly black pepper sensation.

Celebrating twenty years of brewing a well-balanced portfolio of craft beers, Left Hand Brewing Company is located at 1265 Boston Avenue in Longmont, Colorado. The brewery has received 22 medals at the Great American Beer Festival and 8 medals at the World Beer Cup, and its beers are now available in 27 states. “Sometimes you’re not in the mood for what everyone else is having.”