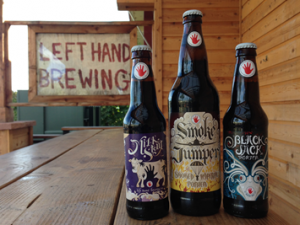 2014 marks Left Hand’s second year in a row achieving a 3 medal win, for a total of 9 medals in the last 5 years. Left Hand’s medal count highlights the brewery’s notable prowess for brewing dark styles. Seven of Left Hand’s 9 wins over 5 years have been for darker beers including 2X Milk Stout, 2X Fade to Black, 2X Smokejumper, and Black Jack Porter. Milk Stout is a genre favorite for the sweet stout category, while Fade to Black & Smokejumper highlight the brewery’s strength for hand smoked malt. “We are very proud of the recognition we have received for our dark beer portfolio in recent years. In 21 years of brewing, we have always strived to brew meaningful, timeless beer with notable balance and complexity.” comments Eric Wallace, LHB President & co-founder.

Celebrating twenty-one years of brewing a well-balanced portfolio of craft beers, Left Hand Brewing Company is located at 1265 Boston Avenue in Longmont, Colorado. Left Hand is one of the most honored and recognized breweries in the state, with over 24 Great American Beer Festival medals, 9 World Beer Cup awards, and 6 European Beer Star awards. Famous for their Nitro series, Left Hand Brewing was the first craft brewery to release a bottled nitrogenated beer. Left Hand’s collection of perennial and seasonal beers are available in 29 states & DC. “Sometimes you’re not in the mood for what everyone else is having.”