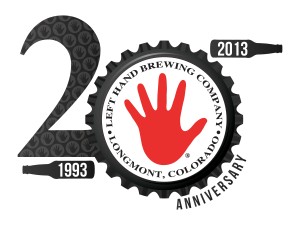 (LONGMONT, CO) — Four weeks ago, 3 inches was all that remained between a flood disaster and a dodged bullet for Left Hand Brewing Company. On Saturday morning, the number 3 proved its good luck again for the brewery – this time with 3 Gold Medals for Sawtooth Ale, Milk Stout, and Fade to Black Volume 1 — Foreign Export Stout at this year’s Great American Beer Festival (GABF) in Denver, CO. The brewery tied for the most Gold Medals taken home this year.

Back in September, the Longmont CO brewery came close to destruction as the mighty St. Vrain River raged to epic levels during the 500 year flood. After plenty of hard work and cleanup, the brewery was back on its feet and fundraising over $60K for CO Flood Relief. It was a tough month, and as VP of Operations Chris Lennert quipped “this wasn’t just another GABF for us – we needed to cut loose collectively, celebrate 20 years of making great beer, thank all of our customers for their support during the flood and tell the world we’re stronger than ever.” And did we ever – on the opening night of the Great American Beer Festival, Left Hand introduced two new Nitro beers in 12oz bottles — Sawtooth Nitro & Wake Up Dead Nitro — to an audience of over 1,500 friends and industry guests at the brewery’s 20th Anniversary party.

After such a stressful month, it was an excellent way to finish a great week, and after 20 years of business, Left Hand enthusiastically looks toward to the future, continually driven by quality, making each pint count!

Celebrating twenty years of brewing a well-balanced portfolio of craft beers, Left Hand Brewing Company is located at 1265 Boston Avenue in Longmont, Colorado. The brewery has received 22 medals at the Great American Beer Festival and 8 medals at the World Beer Cup, and its beers are now available in 27 states. “Sometimes you’re not in the mood for what everyone else is having