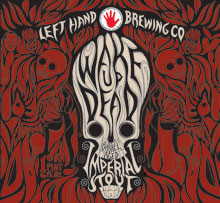 LONGMONT, CO — It only happens once every two yearsÔÇª After hibernating in the Left Hand warehouse for 12 months, the brewery has emptied its cellar and released Barrel Aged Wake Up Dead for the winter season. This dark and complex beer begins with the brewery’s infamous Russian Imperial Stout and ages in whiskey barrels before blending it to woody perfection.

Bottle-conditioned for an authentic old-world experience, patience is required for this black full bodied stout. Wake Up Dead begins with Left Hand’s time tested Russian Imperial Stout recipe, representing 15 years of brewing experience. But unlike its year round predecessor, Barrel Aged Wake Up Dead is transferred to Colorado whiskey barrels, where the beer develops its dark complexities for months to come. A smooth and warming stout, Wake Up Dead teases with hints of raisins, licorice, and toffee followed by earthy, herbal notes.

Barrel Aged Wake Up Dead is available on draft & in 22oz bottles and will be available in the 24 states where Left Hand is distributed and sold. Don’t be afraid of the dark. All power to the stouts!

Celebrating nineteen years of brewing a well-balanced portfolio of craft beers, Left Hand Brewing Company is located at 1265 Boston Avenue in Longmont, Colorado. The brewery has received 17 medals at the Great American Beer Festival and 8 medals at the World Beer Cup, and its beers are now available in 24 states. “Sometimes you’re not in the mood for what everyone else is having.”